Aaron and I have been fairly committed runners for over year now, but for me, getting to that point was a bit of a struggle. Growing up, dance was my primary form of exercise. If I did make it to the gym, I treated the treadmill like it had an infectious disease, giving it a ten foot radius. I had no problem jumping on an elliptical machine or joining in on a group exercise class, but I never ran. Once college rolled around, I was no longer spending all of my free time in a dance studio. Running seemed to be the norm so I halfheartedly decided to give it a chance. I was pretty unsuccessful overall. Each run, if you can even call them that, was a battle that I found completely unpleasant.

Over the years, I improved minimally due to the infrequency of my runs, but (although I really hate to admit this) Aaron really changed all that. We started running together occassionally on the weekends. Having a partner pushed me a little farther and harder than I would on my own, and I hated it a little less; however, the major turning point was Aaron’s decision to enter himself into a 5K. I honestly couldn’t tell you what possessed him to do it, but he signed up, and naturally he wanted me to join in. The thought of competing in a race completely intimidated me. I felt unprepared and pretty much unable. In spite of his encouragement, I refused to participate but promised to be his cheerleader. 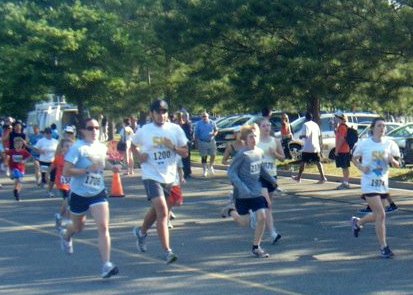 The day of the race something crazy and completely unexpected happened: watching him run that 5K changed my perception of races. There were people of all ages and sizes out there. Of course there were some crazy-fit people who were there to really compete, but there were also grandparents and kids who ran or walked their way to the finish line. Seeing them push through made me realize that I could have done it too. I felt so incredibly dumb for letting my self-doubt get in the way. 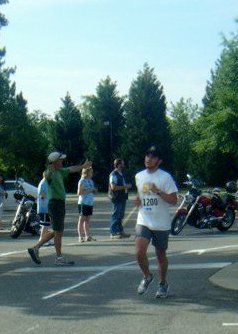 Come June 2011 I was participating in my first race: The Beat the Heat 5K. My competitive streak had kicked in, leading me to actually train. Having a goal to reach really drove me, and running three miles several days a week became my new normal. When I achieved my raceday goal of finishing under 30 minutes, it was such an ego boost. I felt fantastic and almost justified in my new committment.

We actually didn’t run any other races that year, but instead signed up for the Monument 10K in March 2012. It was another milestone that intimidated me, but joining the Sportsbackers 10K Training Team made it a no-brainer. They provided a weekly training schedule to increase mileage gradually and safely, but looking back, what really kept me running was the weekly Saturday group runs. I found acountability and having a set schedule really were a driving force to consistancy. I knew I couldn’t slack on my weekday runs when I was facing increased mileage every Saturday.

I completed my first 10K in 56:17. It was another big boost to my confidence, but moreover, it really showed me that I had the capability to run longer distances. Now you might be thinking six miles is hardly long distance running, but for me it was. From a girl who could barely make it a mile and a half before calling it quits, six was quite the accomplishment. It was another turning point in my running committment. I was actually learning to enjoy it!

Has self-doubt ever caused you to not participate in a certain activity? How did you get past it?