Only a few weeks left (3 until full term and 6 until my due date!), and I’m feeling a weird mix of emotions. There are moments when I really feel ready for her arrival, but they are typically followed by feelings of anxiety around becoming a mother and all of the changes that will bring. I’m sure the breastfeeding class Aaron and I attended Tuesday night didn’t help with that. I definitely feel more informed with tips and tricks for success, but it was also a wake up call. Knowing that babies eat every 1-3 hours and then thinking about/planning the execution of that schedule are two different things. It feels more than a little overwhelming! 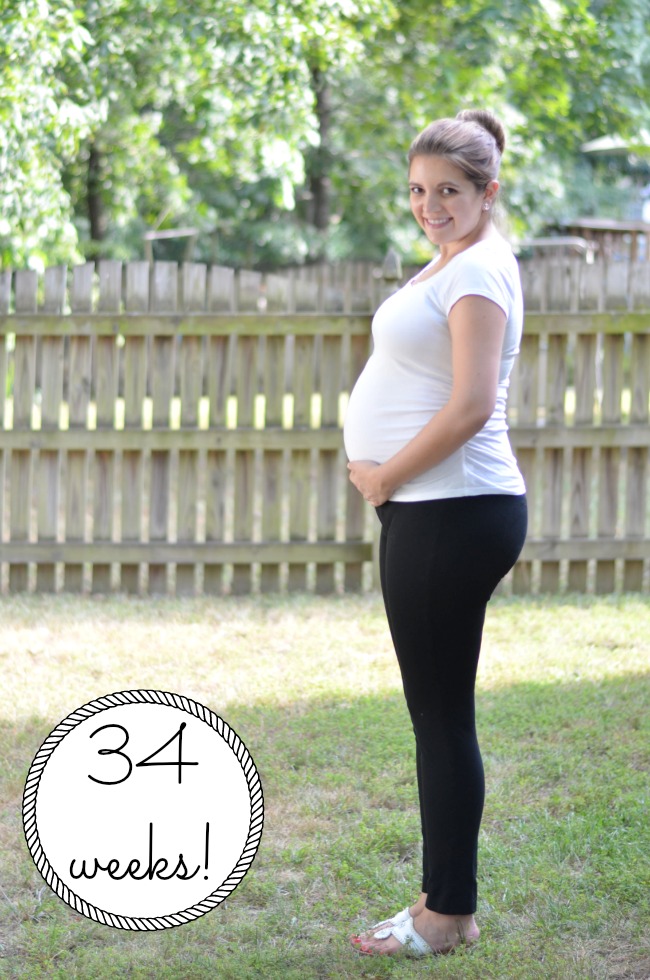 Baby girl is around five pounds and somewhere between 18-20 inches long. She’s still super-active, which is so reassuring. If I happen to lean over, she typically kicks me in the ribs. (I guess she doesn’t like to be squished!) And I’ve been enjoying gently poking her back.

Health-wise, I’m feeling really great. The past couple of days I’ve felt a resurgence of energy, and heartburn has greatly decreased. I’m wondering if this is because she “dropped.” I’ve also felt increasing pressure and weight in my lower back and hips, indicating that she’s most likely in the proper position for birth! I’m hoping to verify with my doctor at next week’s appointment.

The nursery is pretty much complete. There are a couple tiny little details I’ll be adding (like a shadow box with some of my baby memorabilia, a mobile for the crib, and a monogrammed pillow for the glider), but it’s looking so cute. I can’t help but go in there and just stare at it every once in while. Diapers are laid out, clothes are washed and in drawers, and my diaper bag is packed. Essentially we’d be ready for her arrival at any time (but hopefully she’ll be a few more weeks)!

It was a bit hard earlier this week to say goodbye to my sister and mom and send them back off home. They were huge lifesavers when it came to preparing for all things baby. I’m trying to stay positive though, focusing on the fact that they’ll be returning soon to see the baby once she makes her debut!

And because I couldn’t bare to delete this bumpdate outtake with a photo bomb from Tug, I had to share…