Layla officially turned one year old almost a month ago (!!) on August 30th. I already shared the details of her pink and gold first birthday party, but I’ve been holding out on her twelve month update. Part of me was waiting for her one year appointment, which didn’t happen until last Friday, and I think the other part of me was just in denial. ‘Cause let’s be honest, I still think of Layla as a little bitty baby even though she’s becoming more independent by the day! 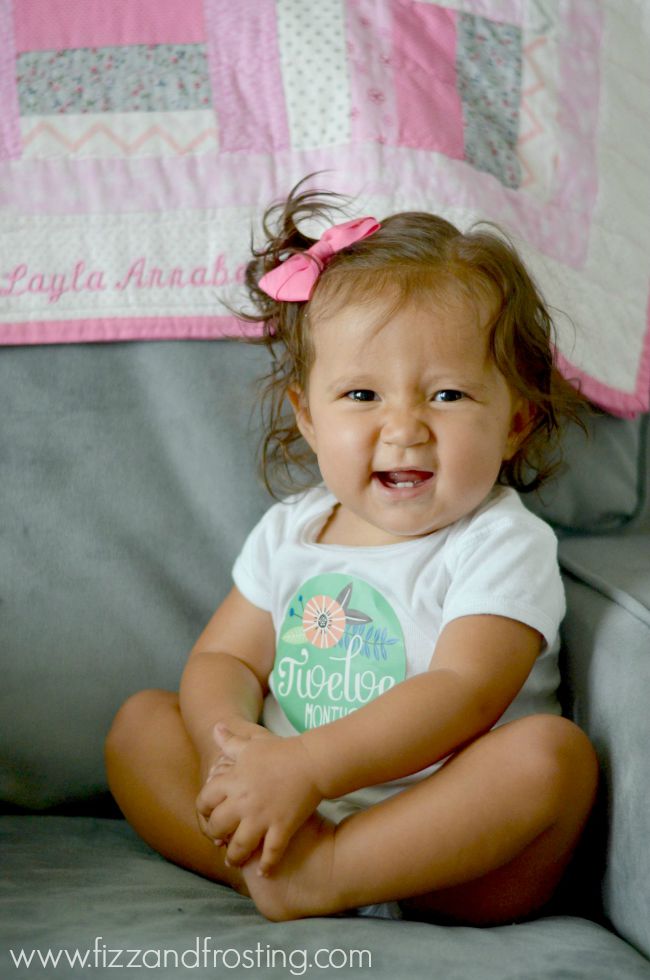 Eating: Layla of course loves her food, but now that she’s a wise, discerning one year old, she wants to have input on her meals. Lately that means all bananas, all the time. Other favorites include animal crackers, snapeas, melon, blueberries, and strawberries. Basically she’s on a fruit kick. Don’t even think about giving her chicken. It goes straight to the dogs! 😉 Just last week we also reduced breastfeeding from 4 feedings to 3. 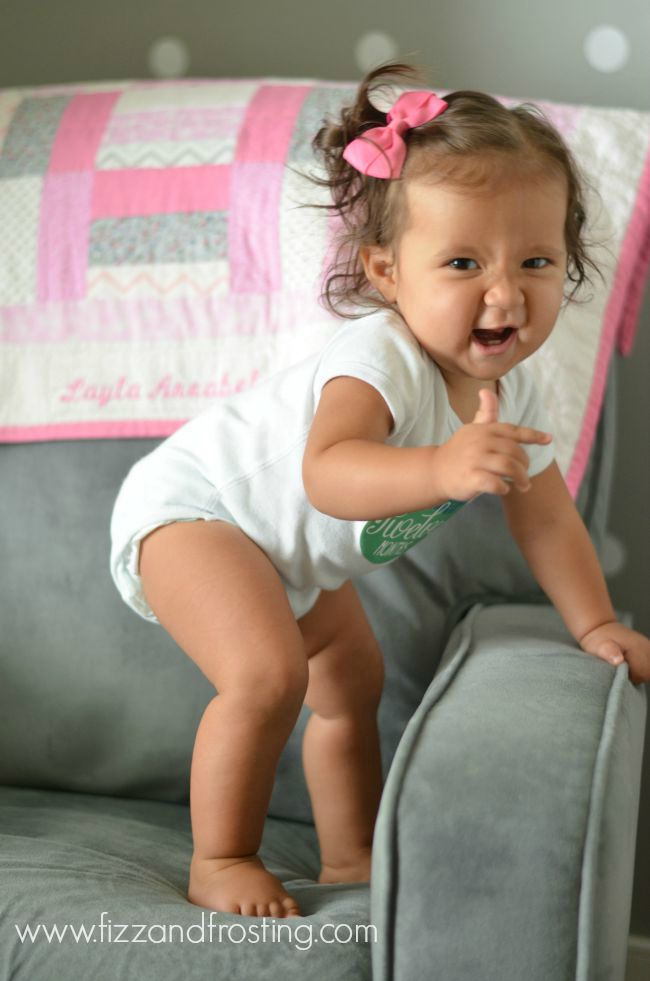 Sleep: Layla is still sleeping about 11.5 hours a night with two daily naps. She is staying up longer in between her naps though (more like 3.5-4 hours instead of 3).

Clothes: Probably no surprise since she’s petite, but Layla is mostly in 9 month clothing. I just recently bought her some 12 month Fall clothes, and I suspect she’ll be in those for a while unless we hit a sudden growth spurt!

Mood:  Layla really is as sweet as she can be, but she is starting to give me some ‘tude. (Do I have a teenager or a toddler?!) She can majorly cut some eyes if something isn’t going her way. She still only gets fussy when hungry or tired… or when you take a toy away. Watch out! She’s becoming much more confident with strangers and unfamiliar places, which is so great to see! 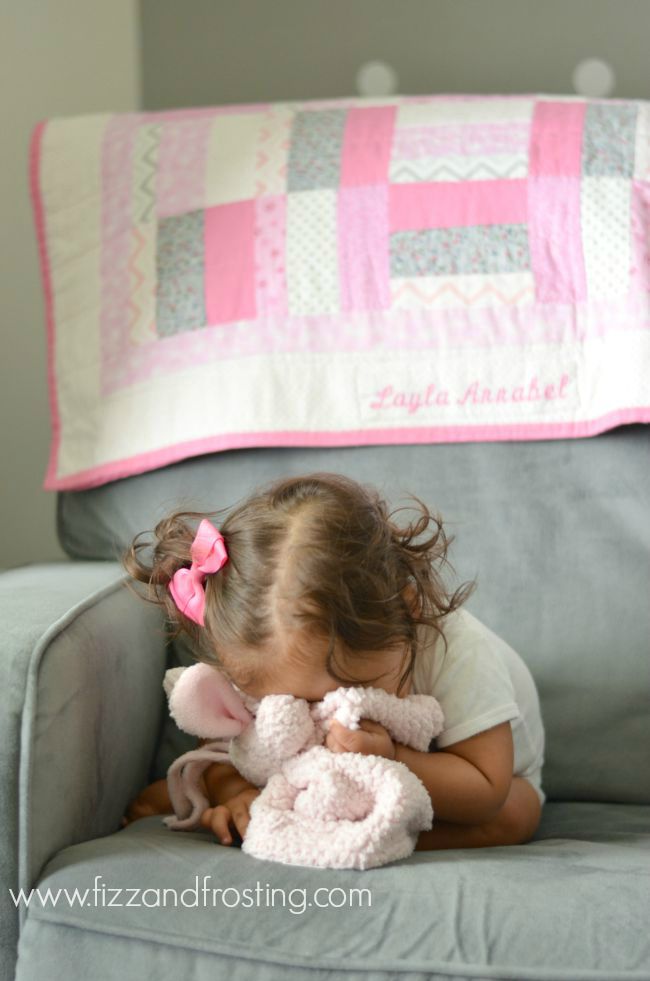 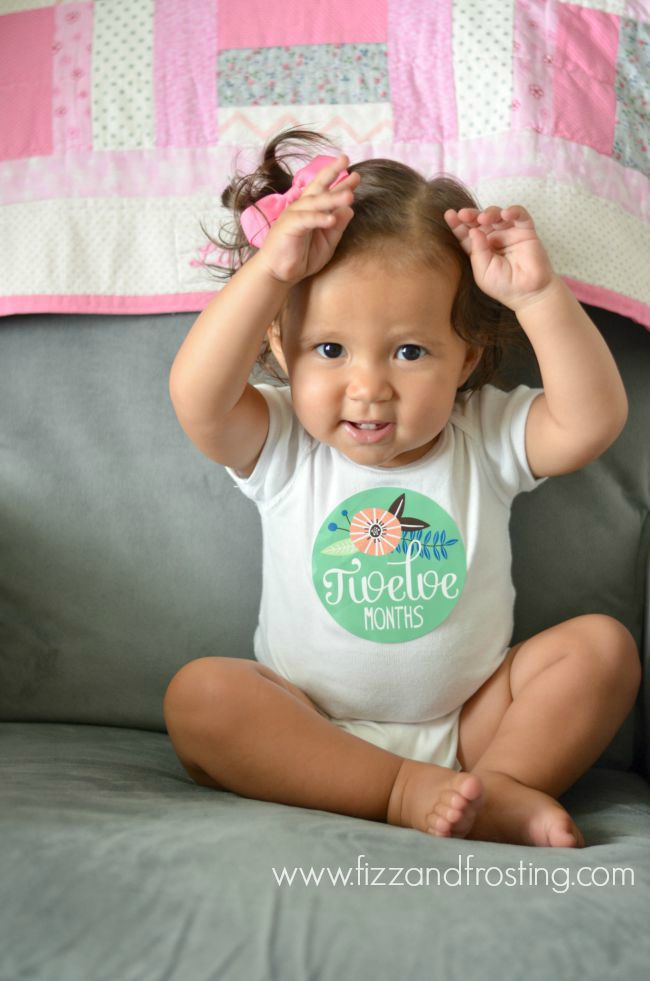 These days Layla is a mover and a shaker. She isn’t walking solo, but will take up to 5-6 steps alone before plopping on her bottom. She walks holding my hand and crawls like a speed demon! She also occasionally breaks into a bear crawl, which is so funny to watch. Hey, whatever works, right?

Seeing how much she understands now totally blows my mind. She know many of her body parts (hands, feet, nose, mouth, ears, eyes, hair), can follow many commands, and can identify most of her animal bath toys when I ask for them by name. She also knows a few animal sounds and will show us one finger when we ask how old she is. Some of her new words include Jetta (one of our dogs), shake, ‘nana (banana), and shoes.

We’ve been attending several Romp N Roll classes for the past month, and I think they have a lot to do with Layla’s newfound confidence. She hasn’t cried over loud sounds or when around our male friends, who she used to be incredibly timid with. She actually gave two of them a smile last weekend, which would have been unheard of a month or two ago. It makes me happy to see her breaking out of her shell!