One of the biggest trends this season is the small scarf, and y’all, I have completely bought into it! I love that you can find them affordably! (All of mine are around $5!) But they make a big style impact! They are also super-versatile! From head scarf tying ideas to wearing them as an accessory, there are so many styling options! I’ve been wearing them weekly and have come up with so many different ways to tie scarves. So, today I’m sharing a few of my favorites: eight ways to wear a small scarf! 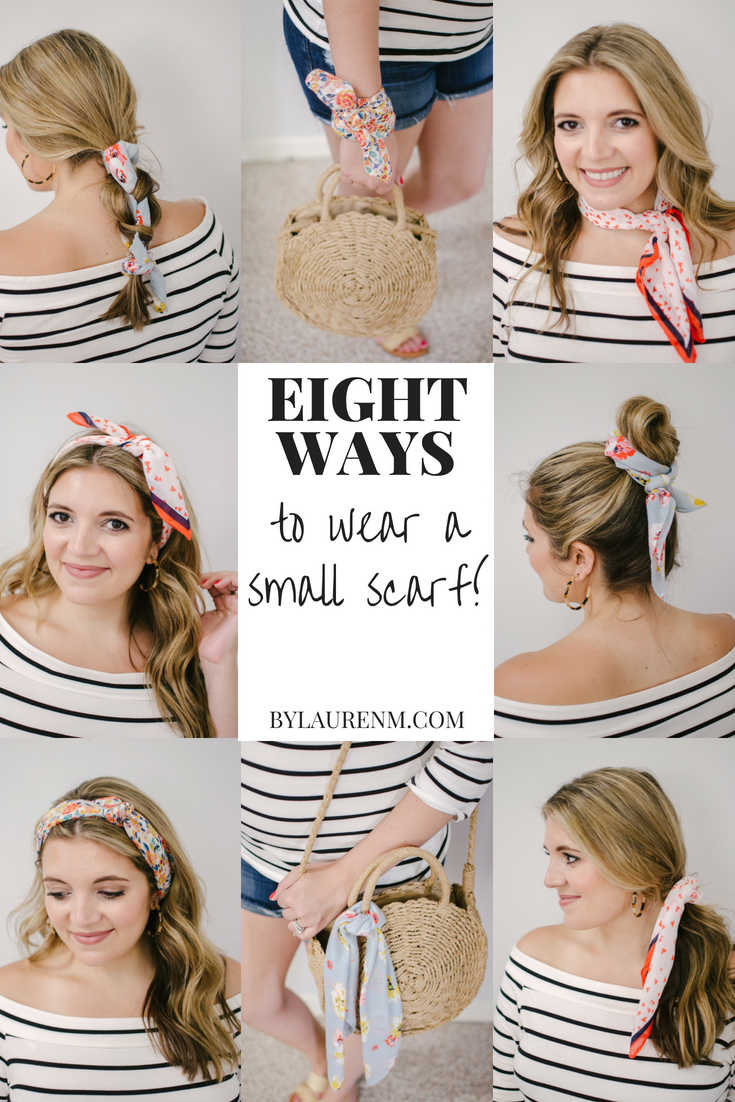 How to wear a scarf in your hair

Let’s start with ways to tie scarves in your hair because these have been my go-to! Especially for the warmer months, adding a scarf is an easy way to create a chic updo!

1. Tied in a ponytail

I prefer to tie my low ponytail a bit to the side when wearing a scarf to show it off more. But you could also wear it centered! I just rolled the scarf and then knotted it, but you could also use a hair tie to make it more secure. 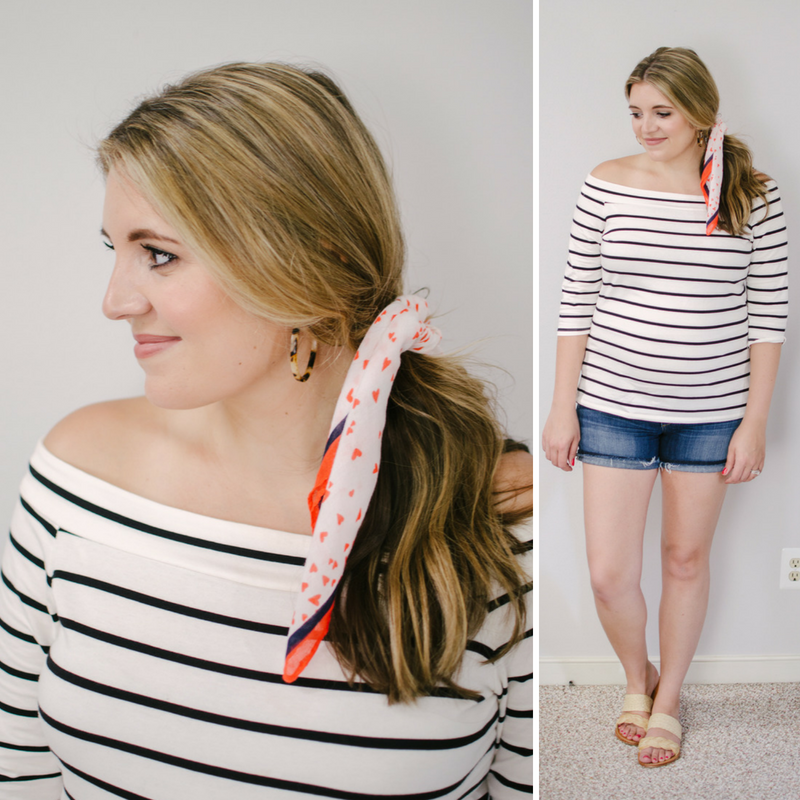 You can also try a high pony! 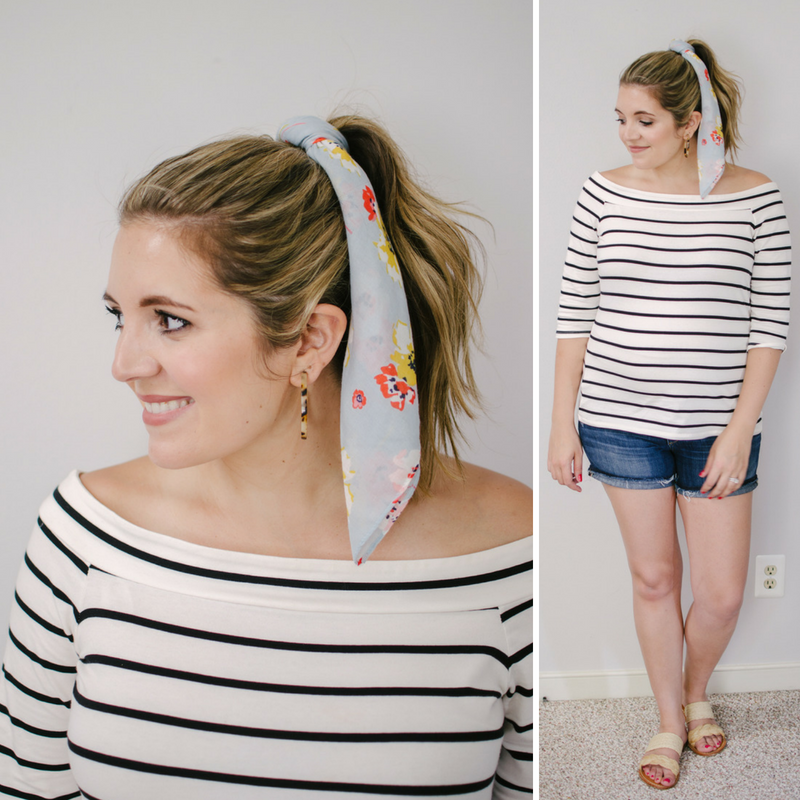 2. As a bow headband

To tie a head scarf as a bow headband, again I start by halving the scarf into a triangle and rolling it. Just leave the knotted ends out! So cute, right? 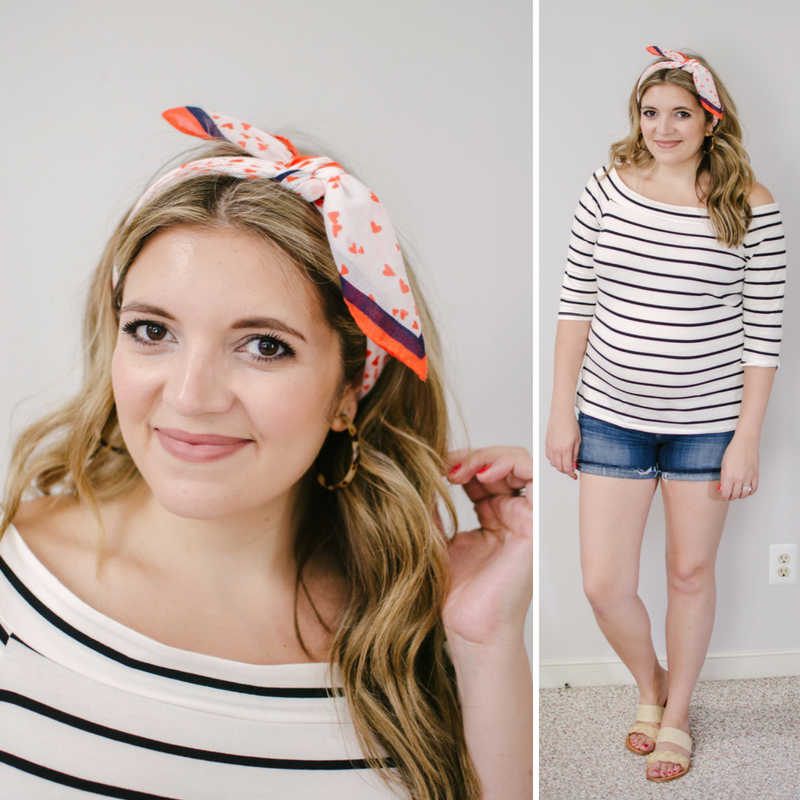 It also looks adorable with a messy bun or other updo! 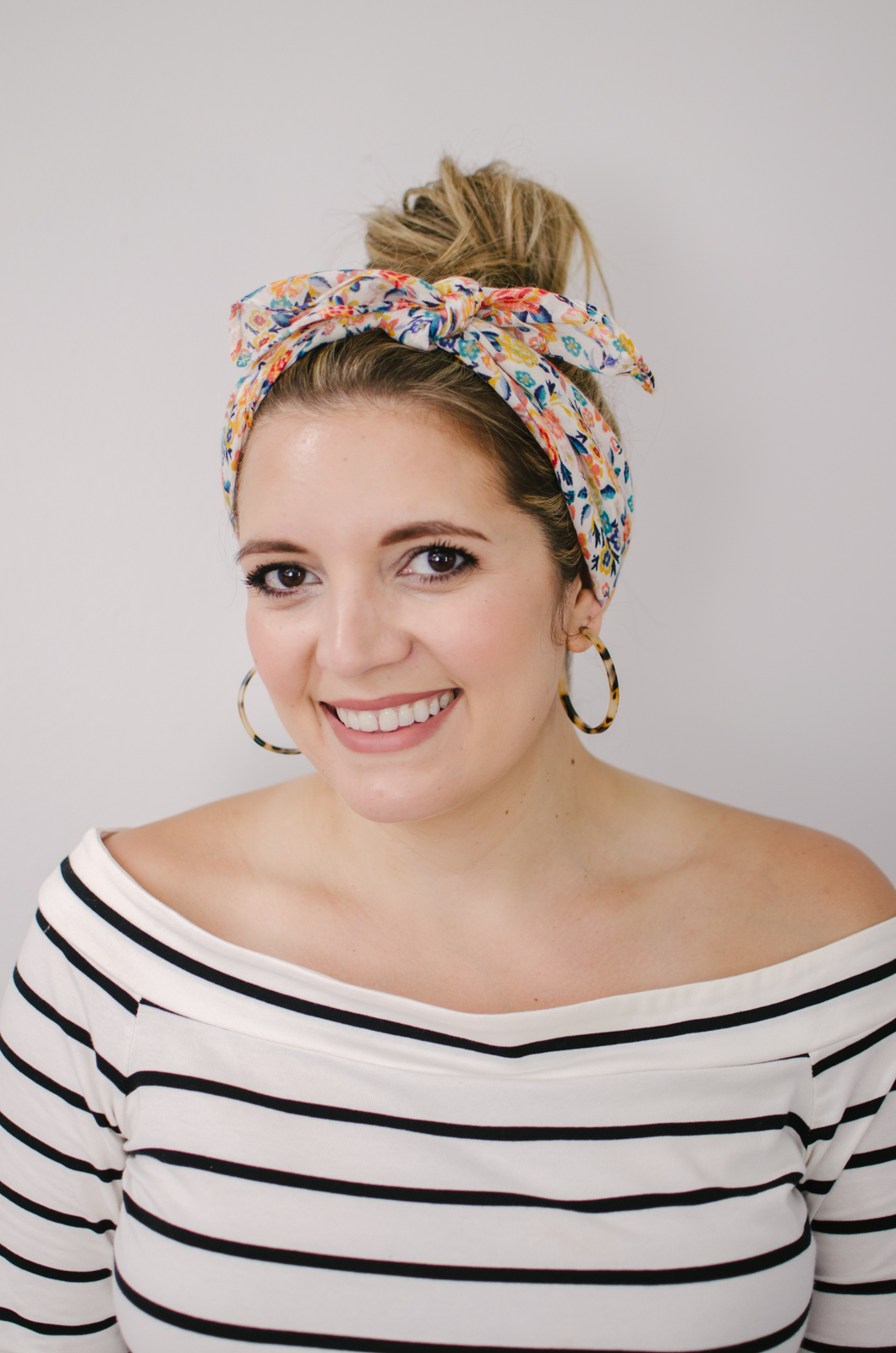 Start with a secured bun. (I just used a hair tie and two or three bobby pins.) Then take your rolled scarf and wrap it twice around the base of the bun! You can wear the bow in the back or the front! If you don’t like the bow look, just tuck the ends in! 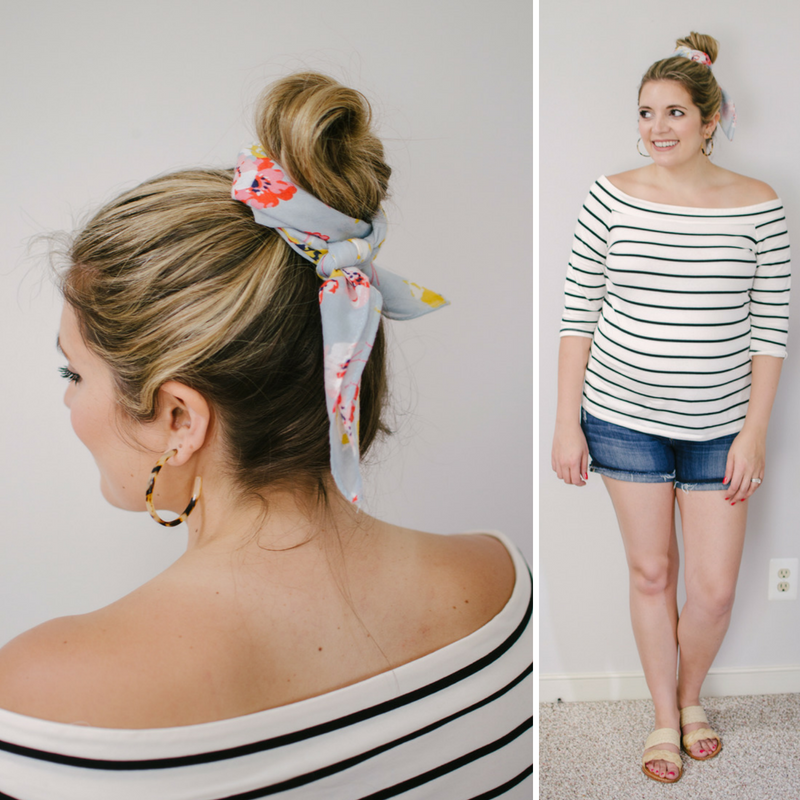 4. As a knotted headband

If you’re not into bows, this scarf headband version might be for you! It’s so simple. Start with the rolled scarf and tie it at the top of your head. Then just tuck the ends underneath. At this point you can also loosen the knot a little bit to make it more visible if you’d like! Tip: for this version I sometimes find it easiest to knot it to fit my head, take it off, and then slip it back on and arrange the ends. 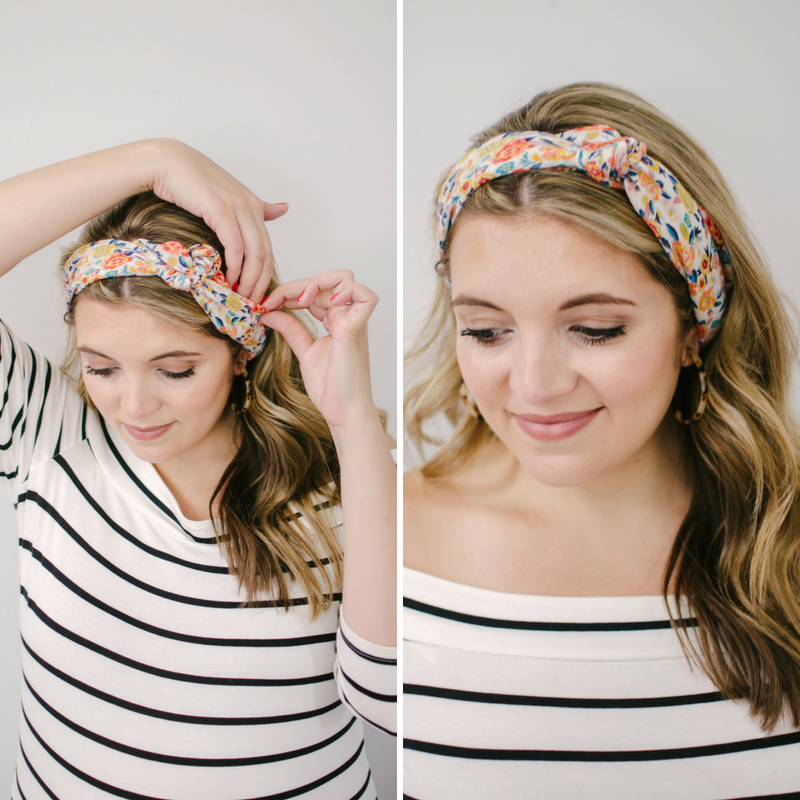 Such a simple chic look! I started with the knotted low pony. Then, I split my hair into three equal parts for a standard braid. Add the ends into the outside two separated parts of hair and braid as normal. At the end I secured with a hair tie and knotted the scarf over it. 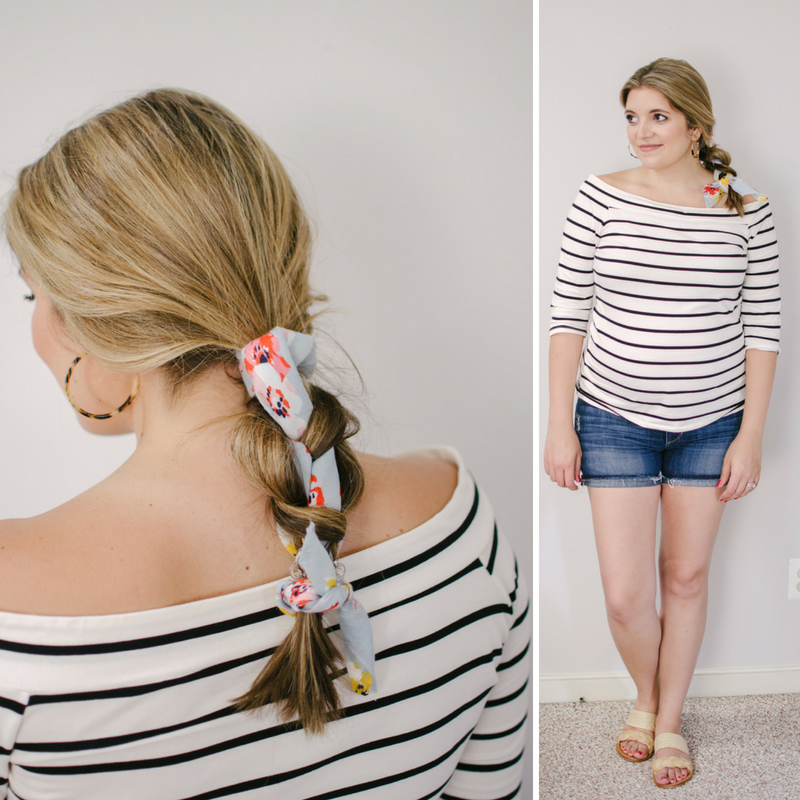 How to wear a scarf as an accessory

Wearing a scarf in your hair isn’t the only way to style one! They also work as a great small accessory!

This has been a go-to lately! It’s such a fun way to add a pop of color or print to your outfit. It’s not just limited to straw bags either. Tie one on a tote or even a backpack! Bonus: when you’re on the go, you can take it off and tie it into you hair if you get hot! 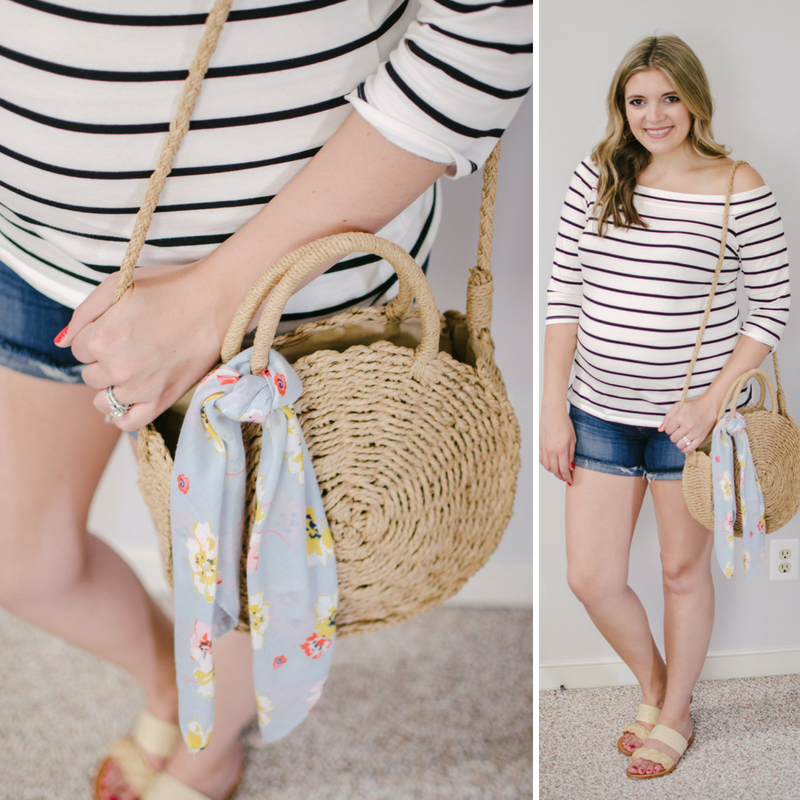 7. Tied around your neck

When the neck scarf trend showed up a few years back, I loved it! The look is so chic and retro. Just knot around your neck and pull the bow to one side! 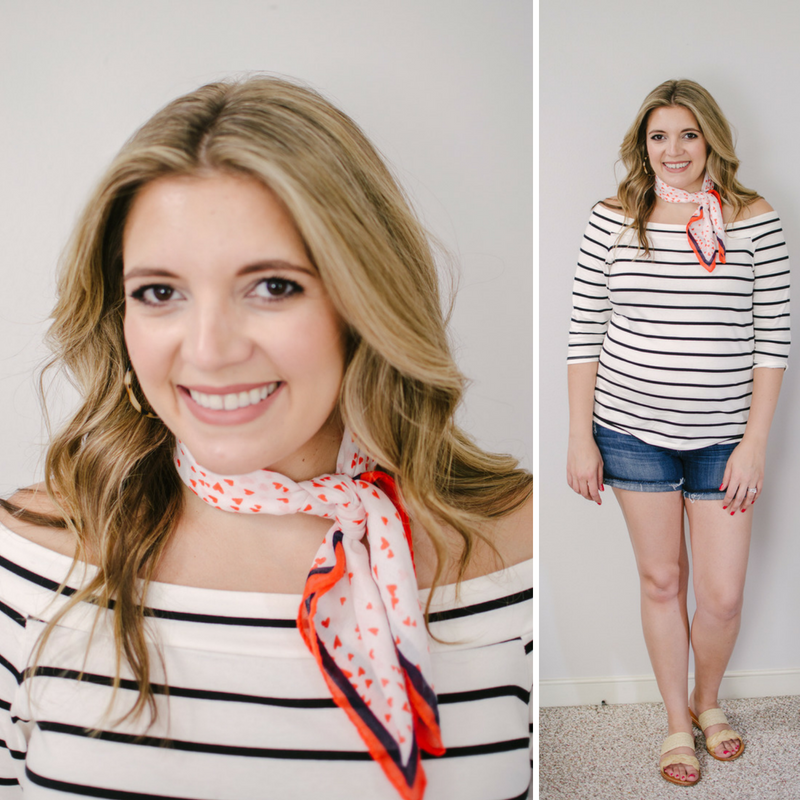 8. Tied at the wrist

Forget statement bracelets, the wrist scarf is such a cute accessory! Take your rolled scarf and wrap it twice. Knott directly on top of the rolled piece and let the ends hang out for a cute bow! 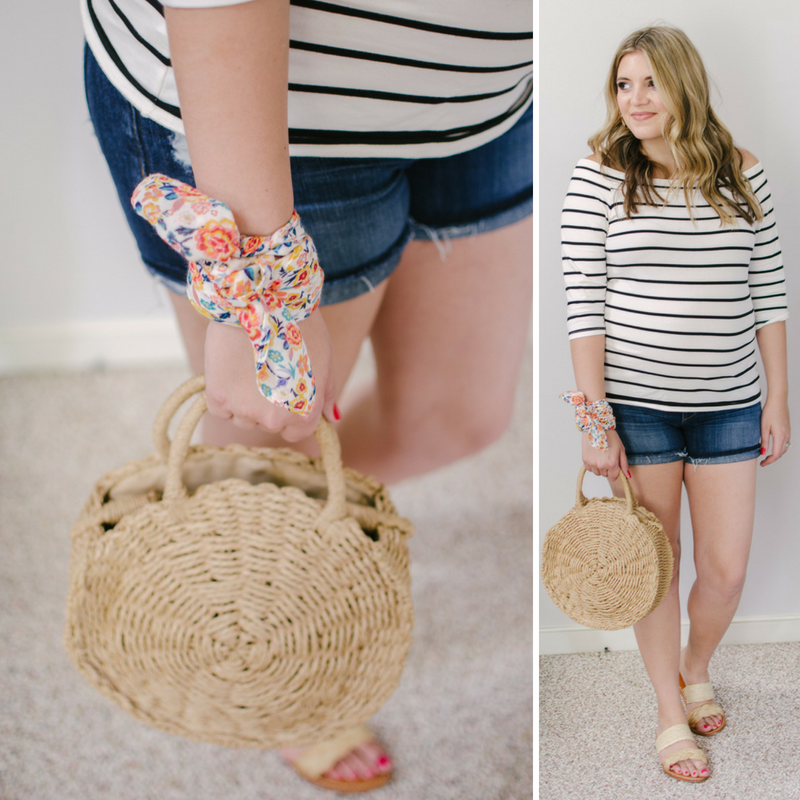 And if you’re on the hunt for a few small scarves to add into your wardrobe, I’ve got you covered there too! I’ve linked the three I used to create these looks along with a few other affordable favorites!

Tell me, which is your favorite way to wear a small scarf? Did I miss any of your favs?

3 thoughts on “Eight Ways to Wear a Small Scarf”