The other day I was just talking about how I had never watched a Hallmark Christmas movie before, and then I turned on my Netflix and saw Christmas movie after Christmas movie in the “trending now” category. Since I didn’t currently have a show, I decided to give one a go.  It only took one movie to get me hooked. But at least I’m not the only one!

I took to Instagram Stories and received a flurry of replies about how you are equally as obsessed with the selection on Netflix! I asked for feedback, and y’all really came through! So many of you submitted your favorites and then asked for me to share the results! So here they are in order of votes – the best Christmas movies on Netflix as voted by you! 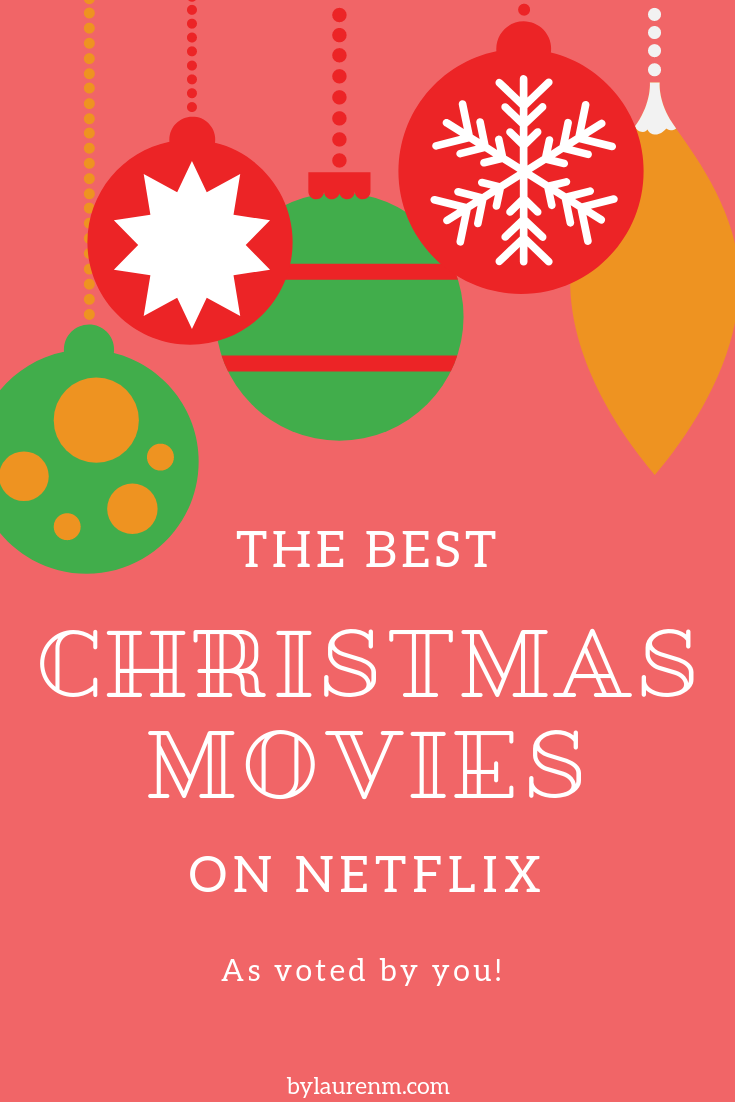 As I mentioned, after watching one Christmas movie, I was on a roll. I quickly started making my way through your suggestions! Can you blame me? Y’all had me so pumped! So with each of your favorites, I’ll be listing a quick synopsis and then my thoughts if I watched it!

Abby is a twenty-something photographer with dreams of opening her own studio, but she’s currently stuck working in a small town photography studio and taking local Santa photos. Her grandfather gifts her an antique advent calendar, which seems to predict the future and point her towards love.

Kat Graham (Vampire Diaries fans anyone?!) is what made me pick this one movie as my very first! She made a very endearing character but the acting from the male lead was average at best. As one would expect with a movie about a magical calendar, I thought it was pretty cheesy. Of all that I watched, it was my least favorite. But that being said, it sure didn’t turn me off of Netflix Christmas movies! So it can’t be that bad, right?!

7. Christmas with a View

Clara leaves a job running a restaurant in Chicago and comes back home to serve as a manager of a restaurant at a local resort. A celebrity chef joins the restaurant as well while in search of additional information about his parents. They begin a romance with lots of bumps along the way.

I’d say we’re right on the same page! Christmas with a View was second-to-last on my list too. I felt like the movie just started mid-story without a lot of background about Clara. Then some of the reasons her and potential boyfriend Shane break up were almost silly and immature. Although cheesy and predictable, the premise wasn’t bad.

Prince Edward is set to take the throne, but according the press and all accounts he’s a playboy who isn’t interested in taking on the responsibility of being king. Reporter Amber is sent to cover the story and accidentally gets mistaken for the princess’s new tutor. She takes on the role to try to get a good story but ends up falling in love.

Ok, I know the premise of this one just sounds a ridiculously cheesy, but I actually liked it! It was one of the better options in my opinion. Maybe I just prefer the whole Disney-like fairy tale story but I really liked Amber and her sweet connection with the princess. Albeit predictable and yes, still cheesy, I’d recommend this one!

Hillary, who is engaged to a successful lawyer, gets dumped right before heading home for Thanksgiving. Instead of telling her family the truth and dealing with their disappointment, she decides to hire an actor to play her fiance.

I’m planning on watching this one this weekend! I actually made it through the first five minutes before being interrupted approximately ten times. #momlife My thoughts to come! ?

NYC party girl Ellen wants to prove to her father that’s she’s ready to take on the role of CEO at the family company. So, he sends her to small town Snow Falls to deliver a Christmas letter with only $100 and with an agreement that she will not share her true identity. Ellen gets stuck in the small town and has to find work to pay for food and lodging at the local inn.

This was another one of the better ones I watched! The storyline was cute, and I enjoyed watching Eliza Taylor as Ellen/Ellie. All around the cast is definitely one of the better ones! It also stars Jake Lacey (he played Fran in Girls!) and Andie MacDowell. Like many of the others it’s very predictable and a little cheesy, but it’s still one of the top picks!

You probably know this one, right?! It’s a story of nine different couples whose lives all intertwine in different ways. The story is set in London in the weeks leading up to Christmas.

I feel like this one doesn’t truly belong on this list since it’s not a Netflix-made Christmas movie, but it is available on Netflix and received lots of votes, so here it is! If you’ve never watched Love Actually before, just do it. The cast includes Hugh Grant, Liam Neeson, Colin Firth, Emma Tompson, Keira Knightley, and so many more amazing actors! This one is rated R though, so be sure to watch it without the kids!

Stacy, a baker from Chicago, heads to a big baking competition in Belgravia with her friend/sous chef Kevin and his young daughter. While there, she runs into Lady Margaret, who is set to marry the Prince of Belgravia and who just happens to look identical to Stacy. They swap places to let Lady Margaret get a taste of a “normal life” before becoming a princess.

Ok, I feel like I also need to preface this one with: YES, I know it sounds like a horribly silly mix of The Parent Trap and a ridiculous princess movie, but I liked it anyway. If you can get over the fact that it’s 100% predictable, you’ll hopefully enjoy it! I thought the story was cute and I liked Vanessa Hudgens as Stacy/Lady Margaret, but I will say the ending was my least favorite part. It’s when the cheese-factor just really went over the top!!

The Pierce Family has a tradition of making yearly Christmas videos. After losing their father, Kate decides to watch all the tapes and thinks she gets a glimpse of Santa. Kate and her brother Teddy decide to set a trap to video him delivering their presents. The siblings end up stowing away in Santa’s sleigh and wreaking havoc when they surprise Santa mid-flight. They must work with him to save Christmas.

So, I know y’all loved this one. It was the movie that I got the most messages about, but it wasn’t my favorite. It could have been that I was watching it with Layla. And let’s just say that Kurt Russell isn’t exactly the holly, jolly Santa portrayed in some other Christmas movies. He’s got an attitude and a little bit of an edge. He even lands in jail for grand theft auto, which brought on so many questions from Layla!! I think I like my Santa a little less sassy and a little more sweet! But maybe I’m alone in that! It wasn’t a complete miss, but I’d just suggest to maybe save this one for older kids unless you want to answer all the questions. 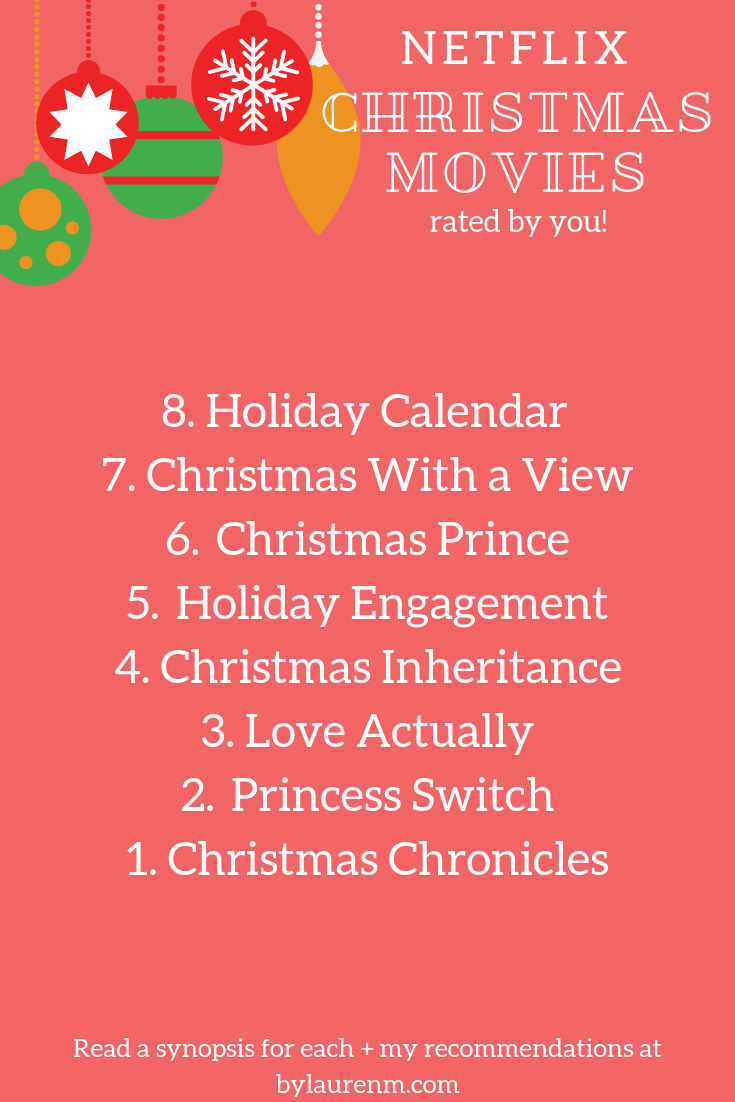 I had a few additional movies that only received one or two votes. I’ll try to add them to list if I have time to watch them! If you have any suggestions, leave them for me in the comments!

2 thoughts on “Best Christmas Movies on Netflix – As Voted by YOU!”