The labor symptoms came early this time! I’ve heard that is pretty common for subsequent pregnancies, but I wasn’t prepared for it. Once I hit 30 weeks or so I started experiencing cramping and Braxton-Hicks. (I didn’t get those until the final weeks with Layla!) But the real labor symptoms didn’t kick up until closer to the end.

I felt my first contraction at exactly 36 weeks. Baby dropped that evening and must have gotten some things moving! At the time I thought those were intense– ha! Silly me. Then at 37 weeks we made a little trip to Labor and Delivery, thinking I had lost my water. Since that is how Layla’s labor started, I was sure that’s what happened, buuuut we were sent home after a few hours of testing. 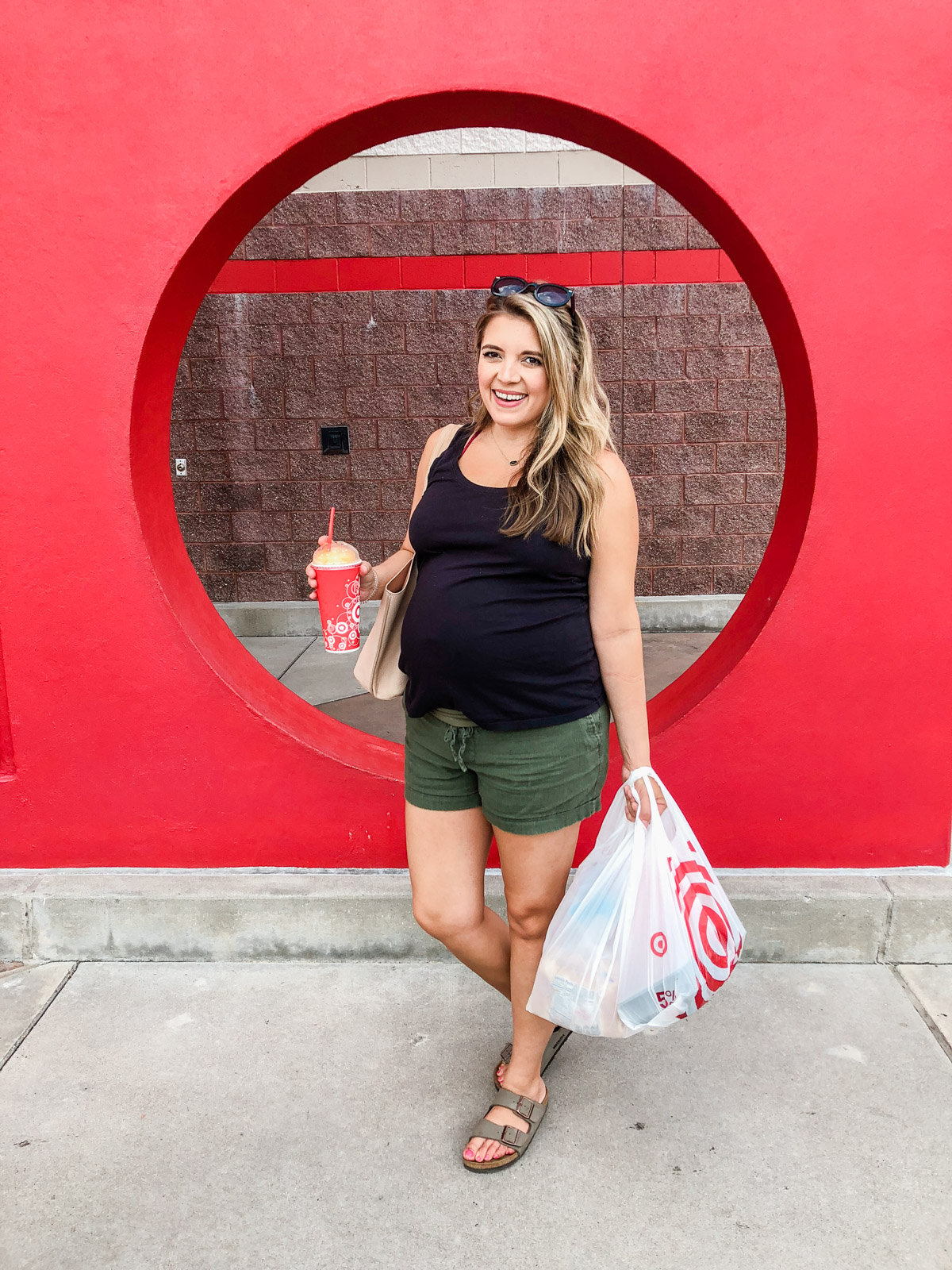 The day before labor!

At 38 weeks, I got a sense that things were happening, and I was right. My energy level went up and so did the contractions! I remember the day before I truly went into active labor having to stop and grab onto the Target cart while shopping with my mom and sister. They were few and far between but the intensity was higher than before!

Then around 2 am on August 13th, the contractions started coming in waves. This had happened before, but I broke out the the contraction timer app to start tracking. They were coming every 10-15 minutes and lasting about a minute. They were uncomfortable enough to keep me awake, so when Aaron woke up for work I told him it might be time to change his work schedule for the day. He was planning on heading to Maryland, but I had a feeling he’d need to be closer to home!

The contractions continued through the entire day. Sometimes they were as much as 20-some minutes apart but the intensity was increasing. I ended up taking two baths that day, just trying to relax. Around 10, I checked in with my OB office, and they asked me to come in for a labor check.

The doctor actually felt my contractions while we were there but I was still only at 2 cm dilated (and 90% effaced). He joked that I was definitely running out of room, so it would probably happen anytime. Of course, I didn’t think any of it was funny at the time. C’mon doc. Don’t joke with a woman in the midst of contractions!!

Later that afternoon after Layla woke up from her nap, I hit a new level of pain. I had her watch a movie in my bedroom, so I could lay in bed. I remember gripping the life out of my my pregnancy pillow to try to keep it together.

Around 4, I was about to hit my breaking point! After over twelve hours of contractions and being alone with a toddler all day, I was exhausted. At this point, I was having to grip onto whatever was around me (tables, the kitchen countertop, the stair rail…) anytime a contraction came. They were painful enough where I could do nothing else but work through them! I tried my best to keep it together in front of Layla, but there were definitely a few silent tears shed!

Thankfully Aaron made it home not too long afterwards, close to 6. The contractions were getting closer together, and I was timing them about 5 minutes apart. I finally called the OB office after hours line at 6:45 to give them an update, and y’all, I was so not encouraged by the on-call doctor! She knew I had been in earlier in the day, and even though I’d had contractions all day she didn’t seem to think it was time. She still told me to go in anyways, but I was about to lose it!!

We waited for Aaron’s mom to get to the house, and I labored at home for another hour. Finally at 7:45 I’d had enough and told Aaron it was go-time! I was so nervous they were going to send me home again.

But it was fate! After being admitted to L&D triage, the on-call doctor came in. It was none other than the doctor who delivered Layla! He gave me a check, and I’ll never forget his first words were, “well I’ve got good news for you.” Even amidst the pain, they were such a relief!! Aaron said I actually cracked a smile for the first time all day. Hey, nothing like knowing the end is in sight!! I’d progressed to 4 cm, and we were ready to be admitted!

I labored another hour or so (and another cm) before getting my epidural. My parents showed up shortly afterwards. (Did I mention that day just happened to also be my sister’s move-in day at college?! They had just finished moving her in and driving back from West Virginia!) And then I promptly passed out. Aaron of course rook advantage and snapped some super-unflattering photos of me! 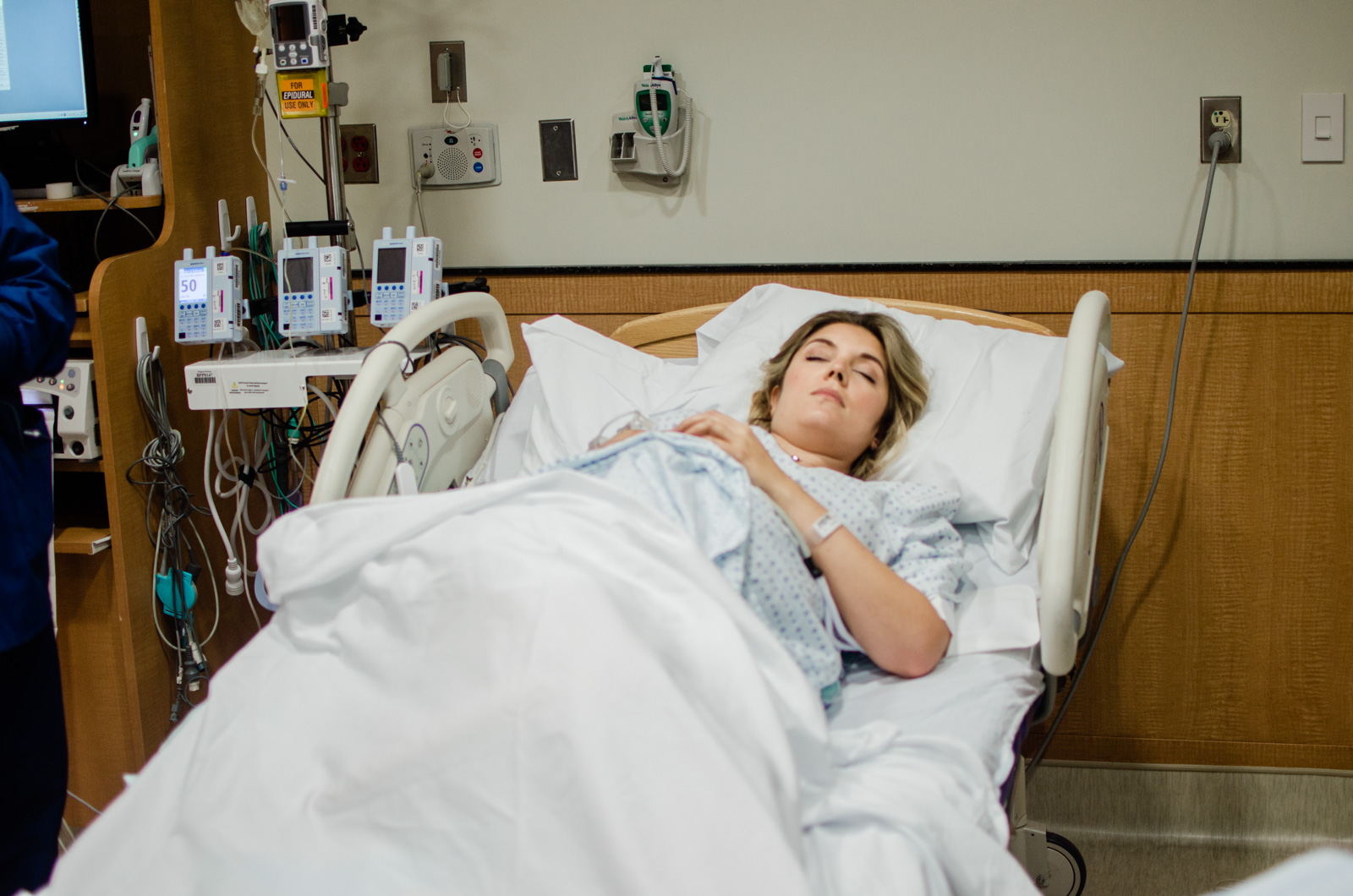 I was pretty in and out for a while. Being up for nearly 24 hours had taken its toll. Somewhere around 7 cm the doctor broke my water. Close to 1 am on the 14th, I started feeling increased pressure. I mentioned to the nurse that I was starting to feel the need to push. They confirmed I was fully dilated and moments later were getting me ready for delivery!

Things went pretty darn quickly after that. After one push, baby was already crowning. She told me to hold off because she didn’t trust me not to deliver the baby! ?The doctor was in seconds later. After three more pushes, Eliana was born at 1:28 am! She weighed 7 lbs, 2 oz and was 19.5 inches long! 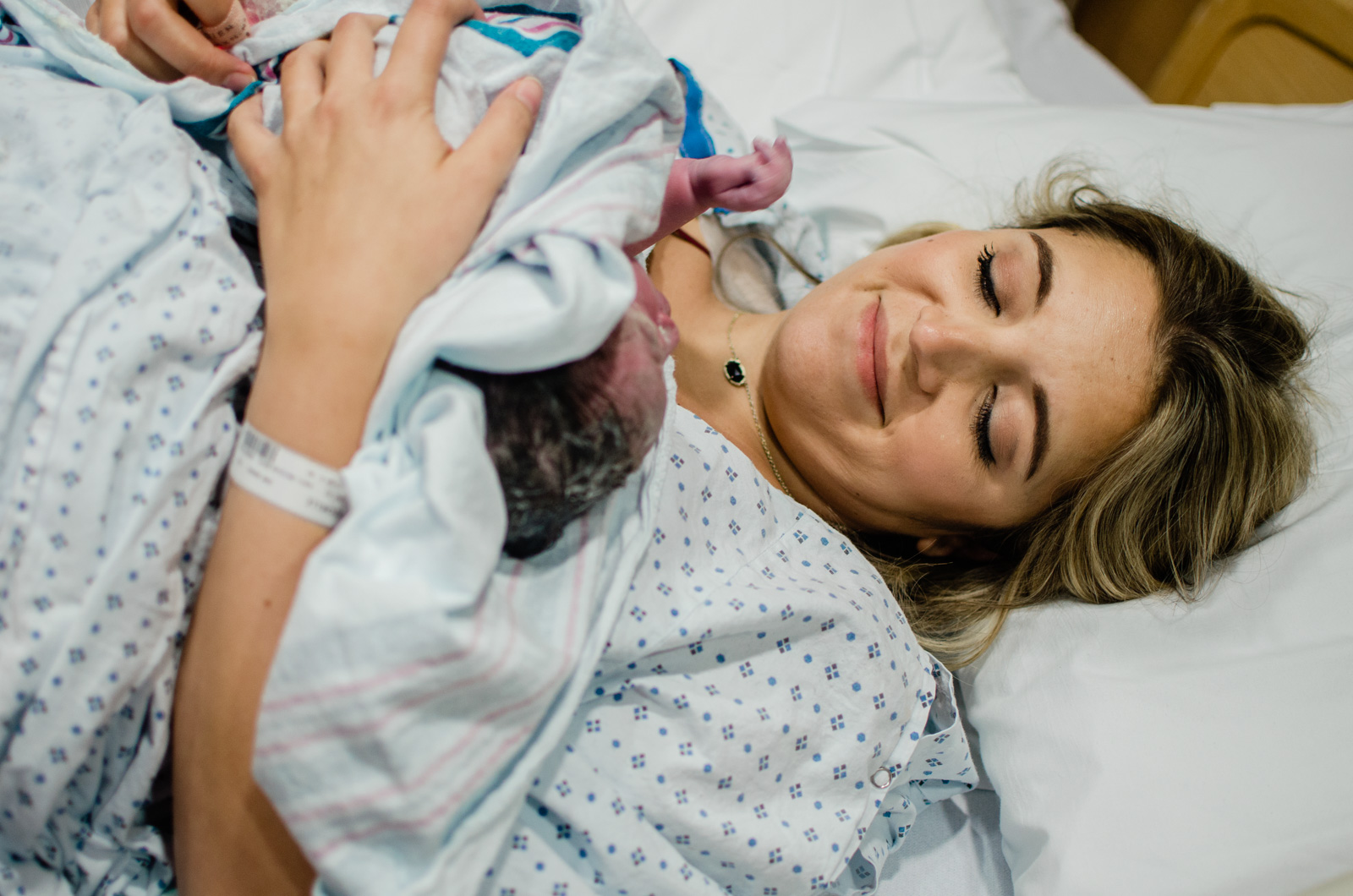 The doctor immediately placed her on my chest and I remember saying, “oh hello, punkin’!” So funny the things that stick out to us, right?! Aaron cut her cord, and she almost immediately latched to nurse. It was crazy to see her rooting only minutes after being born. Thankfully we were given a few hours of alone time. Man, those first moments were so precious. 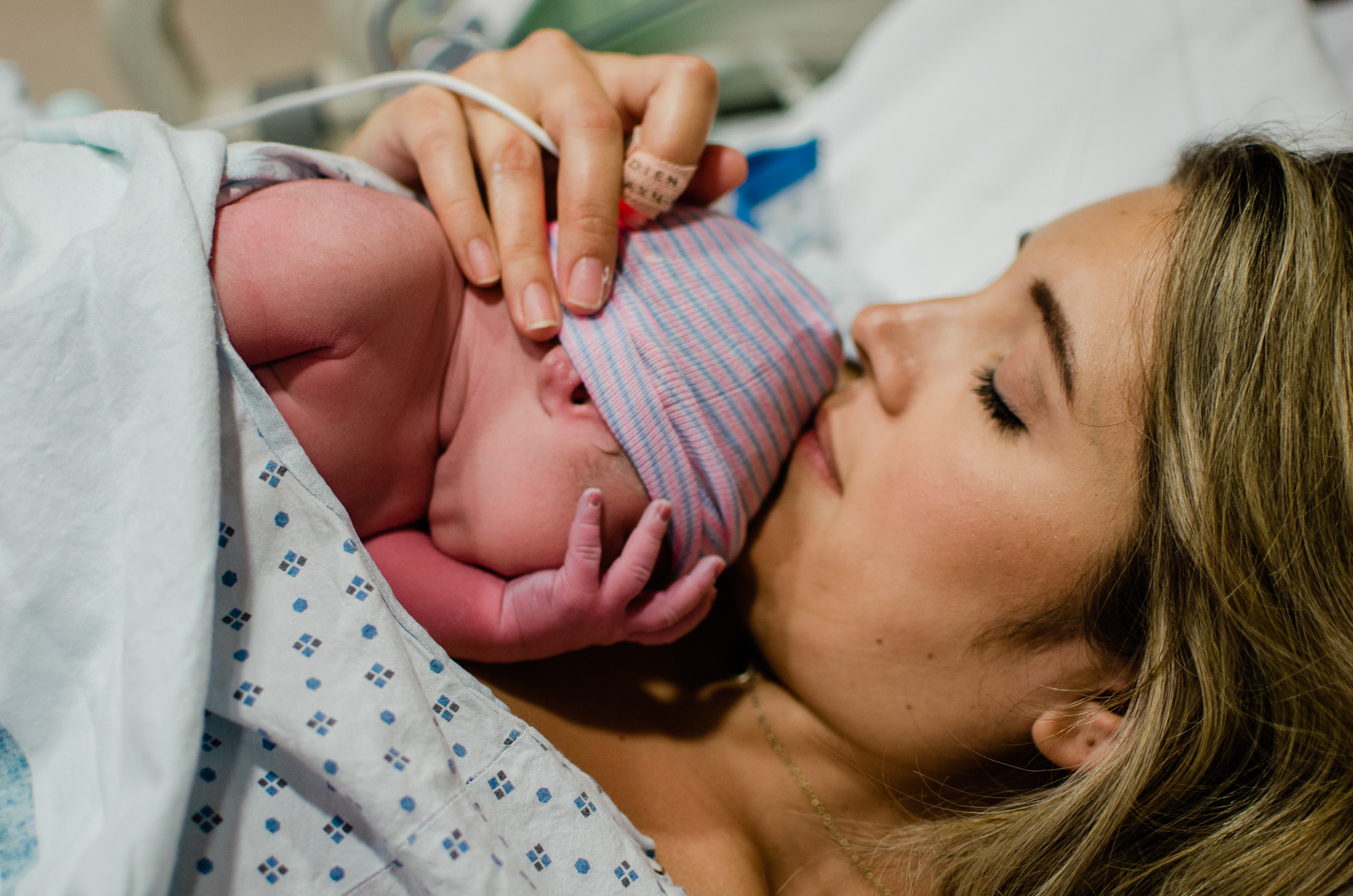 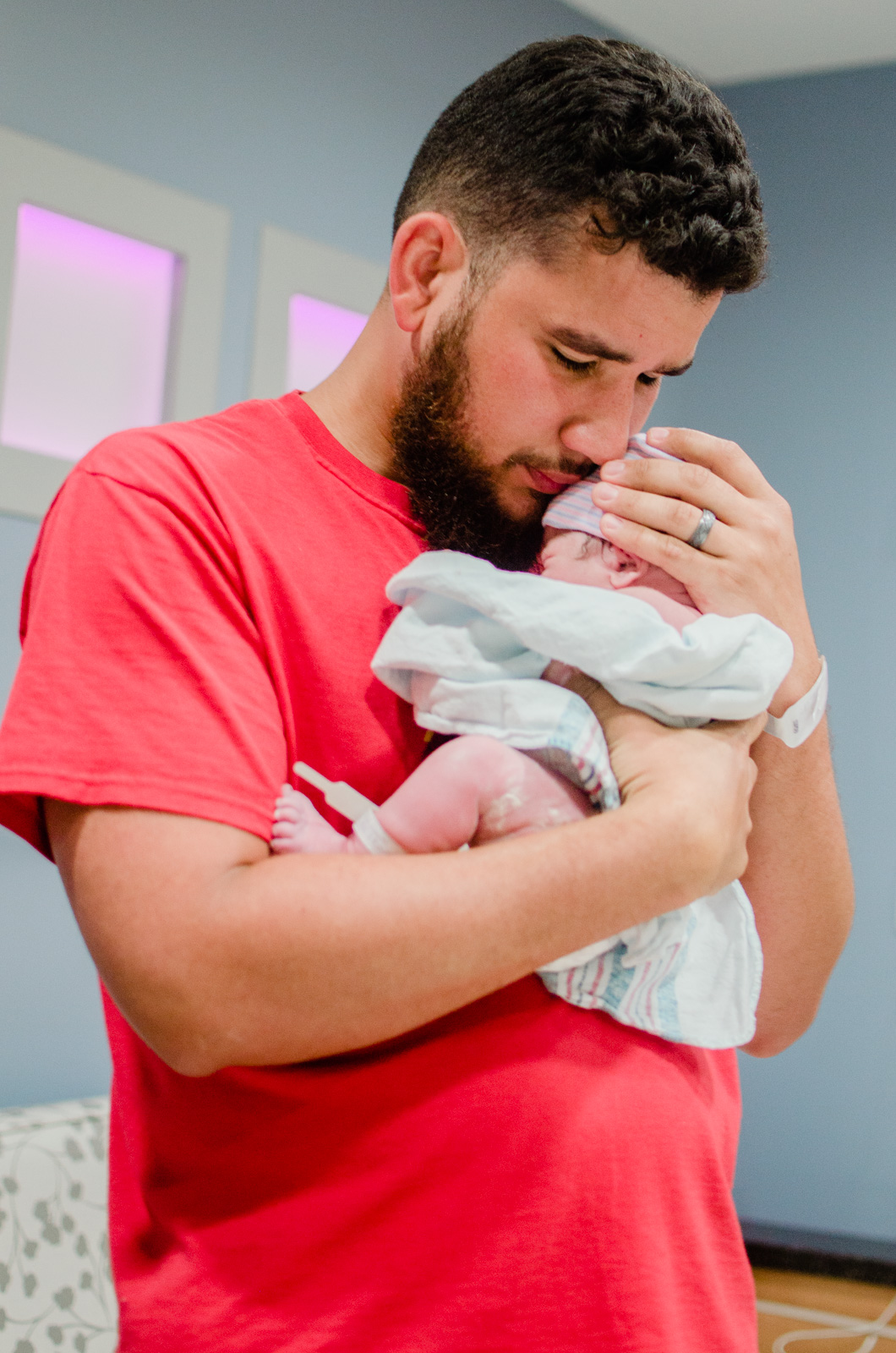 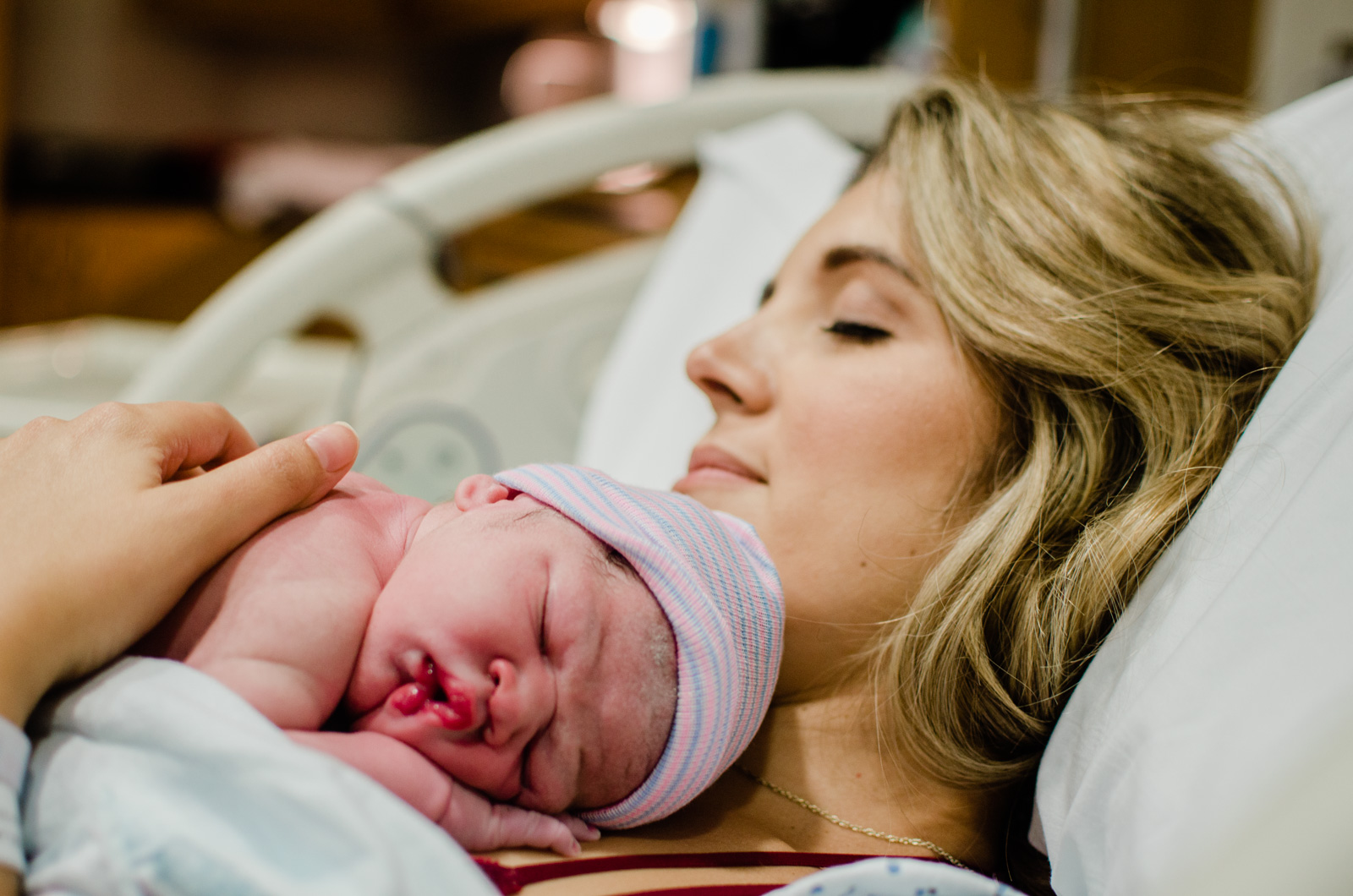 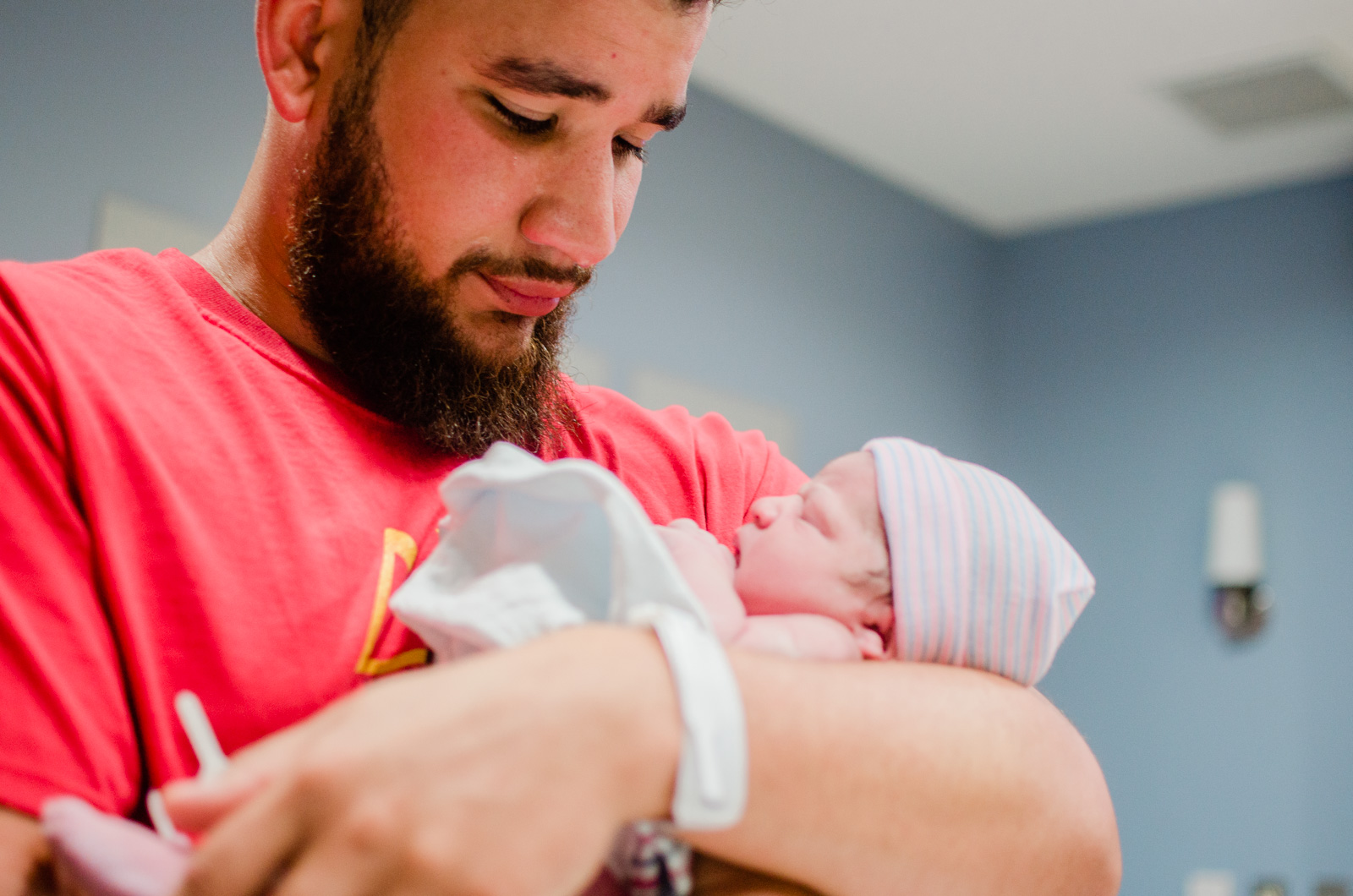 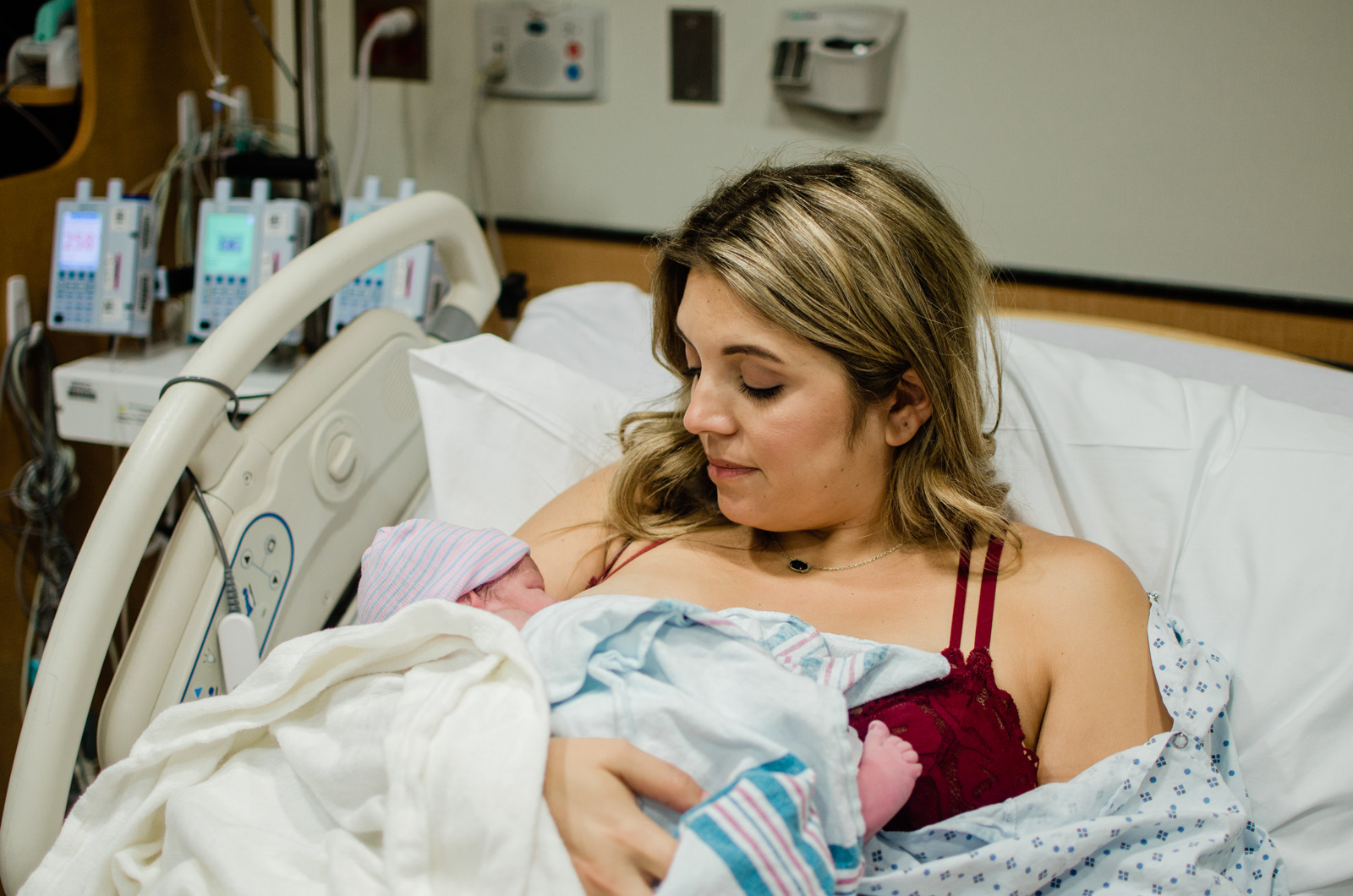 My mom had stayed at the hospital with us as well, so she came in a few minutes later to meet her. We all took turns holding her and staring at her sweet little smushed face!

Although a longer and more painful labor, Ellie’s delivery was pretty quick and painless! Like I said when Layla was born though, I’d do it all over 100 times for my sweet girl!