Over the weekend Aaron and I hit a new running milestone: we accomplished our first seven-miler. To be honest it was kind of a nightmare. I set my alarm incorrectly and wound up waking up only twenty minutes prior to our group’s start time. Panicked yet still groggy, we threw  clothes on and raced to City Stadium. Somehow we managed to arrive before the group left, but the downside was that I began the run without as much as one sip of water.

I know everyone is different, but I am one of those people who gets up nearly two hours prior to running to eat something small and properly hydrate. From the very beginning, I could tell it was going to be a challenge. I was able to grab a small cup of Powerade at a SAG station about half way through the run, but it wasn’t enough. My whole body felt heavy and sluggish. The last mile was brutal mentally, and an overall whoopin’. 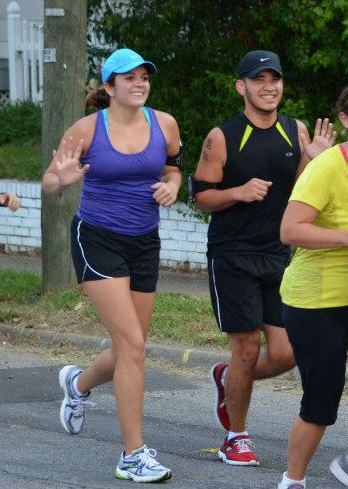 Even though I wouldn’t wish a run like mine on anyone, I am glad that I experienced it. From this point on, all of our runs will be milestones until we make it to 13.1. Some will hopefully be better than last Saturday, but I’m sure there will be plenty more mentally tough moments, and I think I’m one step closer to being prepared.

What tips do you have for making it through mentally tough moments?