Both my sister and I arrived weeks early, so I never imagined that my pregnancy would last the full 40 weeks. Around 38 weeks, I became increasingly impatient, symptom-spotting every last cramp, ache, or bout of indigestion. But at my 39 week appointment, I was incredibly disappointed to learn that my body had made no progress in dilation. Before leaving the appointment my doctor let me know that she would be scheduling a “post-date” ultrasound to check on baby’s progress and an induction. On 8/28, I got a call from the hospital confirming my induction date of 9/4. Having an induction date was simultaneously calming but also unnerving. I knew that I wouldn’t be pregnant for much longer, but I also had a date looming, and I was seriously hoping the baby would come on her own.

Apparently scheduling an induction was all it took to get my body moving along. On Friday, 8/29, I awoke to a popping sound and light liquid leak. I immediately suspected that it might be my water breaking. After walking around and lying in several different positions to see if the leak would continue, I knew it was time to call the doctor. I was instructed to head to the hospital to get checked out. Aaron and I took our time packing the last minute essentials, and I took a moment to eat a Kind bar, a banana, and some watermelon, knowing it might be quite a while before my next meal.

When we arrived at the hospital, I was admitted into one of the Triage rooms. The nurse had to verify that I had indeed lost my water. Of course, the test strip came back negative, so I was instructed to walk around L&D for a while to see if the leak would continue and we could get a positive reading. 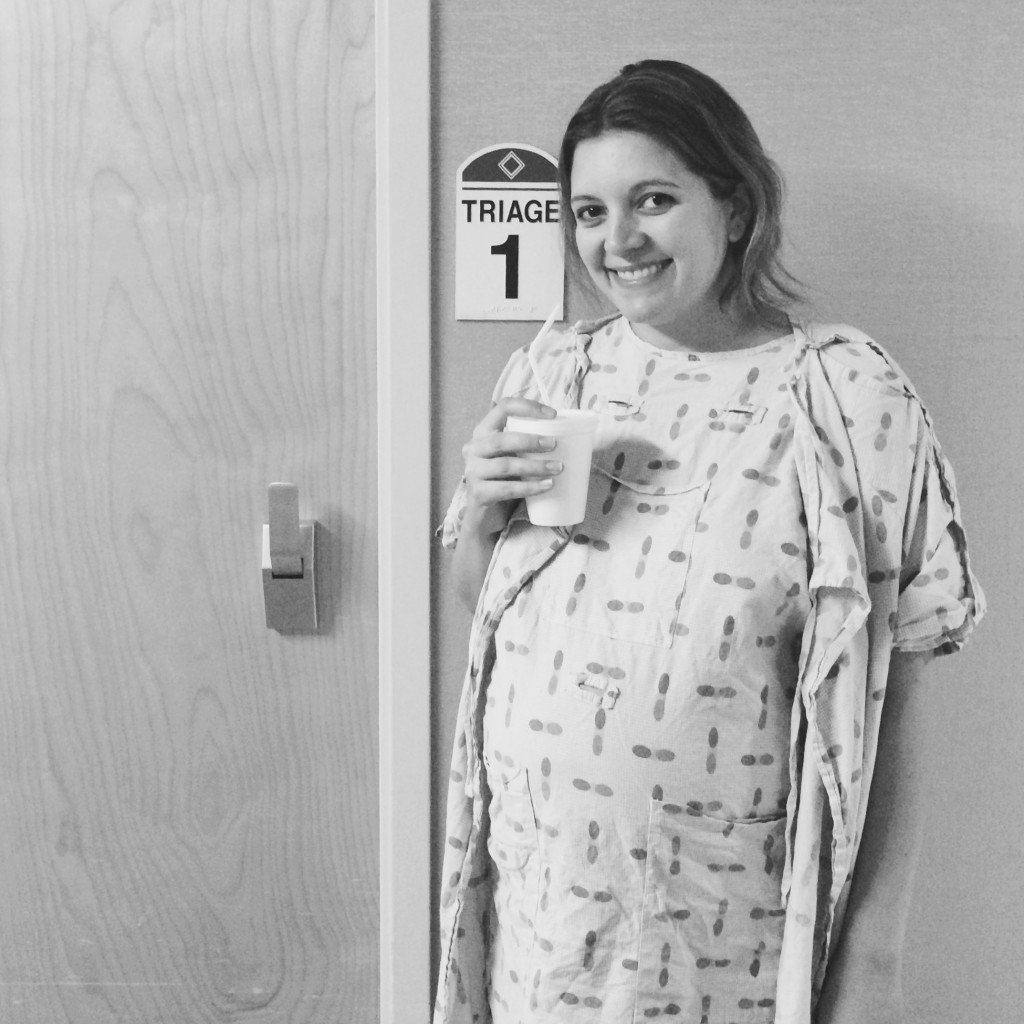 After taking what felt like a million laps around the same corridors, the nurse checked me again and verified that I was ready to be admitted for L&D. At this point, cramping was very, very light, and I was just elated that the baby was finally coming!

I was strapped in to my monitors, administered an IV, and had some blood drawn. After monitoring me for a bit, it was pretty clear that my light contractions were not moving along quickly enough and the nurse started pitocin. 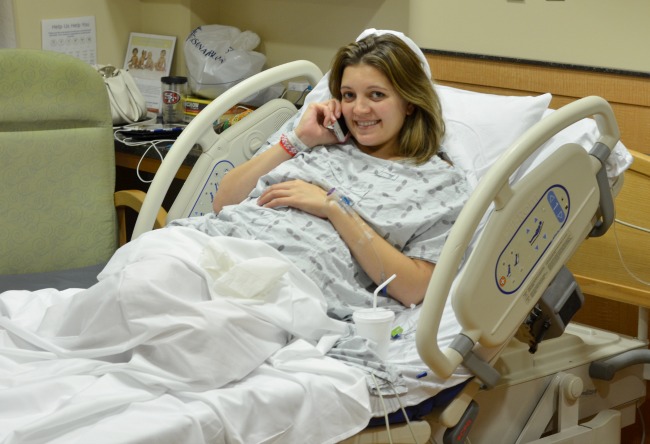 To help things along, I got on the birthing ball and started bouncing away. Contractions started almost immediately, and the nurse continued to bump up the pitocin approximately every 15 minutes. Once the contractions started becoming more painful, the only way I could work through them was by bouncing. I bounced through them for over three hours before finally asking for the epidural. (Actually it was Aaron who prompted me to ask when the nurse checked on me. I think he could read how much I was struggling even though I wasn’t quite ready to admit it.) 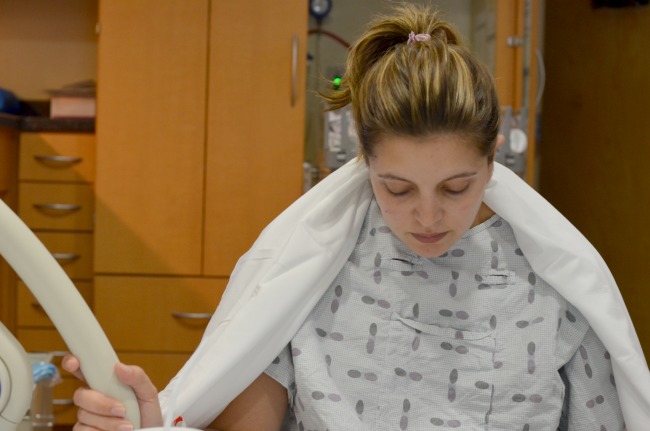 Once the epidural was administered (around 3:45 pm), I was able to relax once again. The OB checked my progress and indicated that I was nearly 4 cm dilated, 90% effaced, and baby was at station 0, which was a vast improvement over the less than 1 cm when I was admitted. The OB was incredibly pleased with my fast progress, and we were sure that the baby would come before the day was over.

But naturally, progress majorly slowed afterwards. The baby was not responding well to the pitocin, and every 30 minutes or so the nurses had to help me switch positions. They also had to continually lower the pitocin levels so that her heart rate could increase and then raise them once again to kick up the contractions. Around 7 pm, the nurse decided to invert me in hopes that the baby would drop. (“Think of it like a lime in a Corona bottle,” she said. I was willing to do anything to help that baby lime drop into position!) 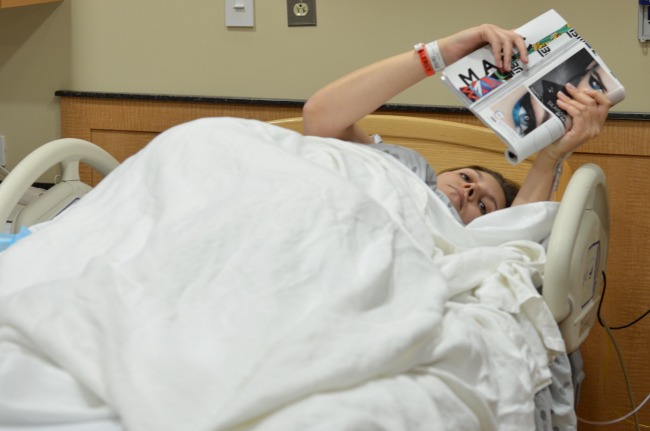 Around 8:30 pm, baby’s heart rate dropped again and the doctor decided to have me wear an oxygen mask to give the baby “an extra boost” in preparation for delivery. I was a little stressed by it, but the OB assured me that things were progressing and that they believed I would still be delivering vaginally. I had progressed to around 6-7 cm dilation, and we were sure it wouldn’t be much longer.

Again progress stalled, and I stayed around 7 cm for a couple hours. Around 11:30 or 12, I was still only about 8 cm dilated. But not long after, around 12:50, the nurse indicated we were ready to start pushing. I was simultaneously a bit nervous but also relieved. Thankfully, this was the quickest part of labor. Delivery was so much easier than I had built it up to be, but I know that having a great nurse and Aaron cheering me on made the minutes fly by. It only took around 15 minutes of pushing before our perfect baby entered the world.

The doctor immediately laid her on my belly, and I cried my eyes out. She was 7 lbs 8 oz and 19.5 inches of pure perfection. And although Aaron and I were going back and forth between a couple name options, I instantly knew that she was our little Layla. 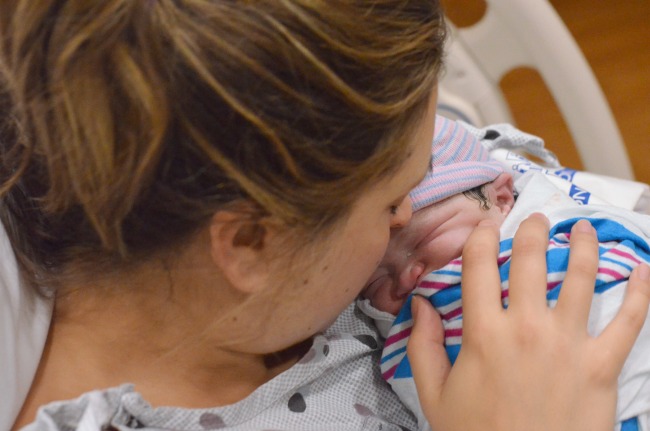 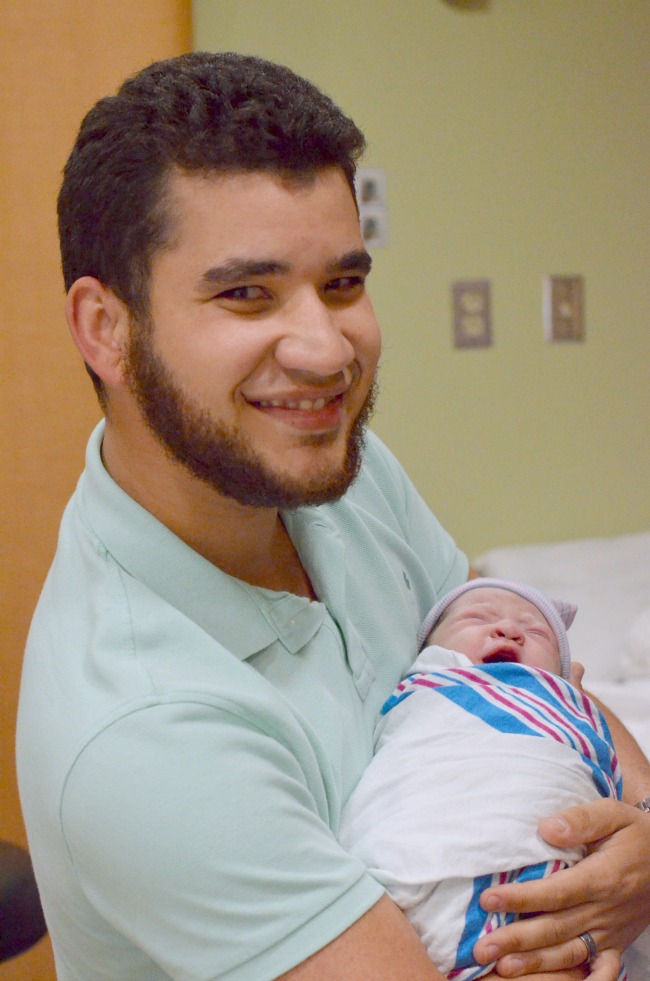 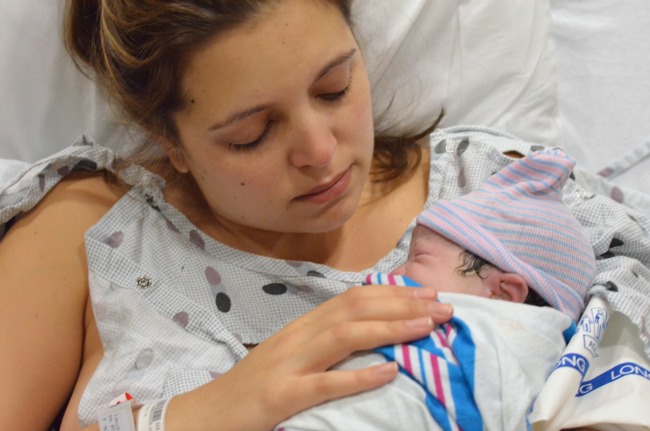 Those first two hours we just soaked up every bit of her. We called family and even took a few minutes to FaceTime with my parents and sister since they couldn’t be there. But more than anything else, I think we just stared at her.

it was a long, hard 19 hours, but I would do it a million times over for my little “punkin.” She is Aaron and I’s world and our absolute greatest blessing. I am still in complete awe of her.