Bumpdates are better late than never, right?! I might be half way to 37 weeks now, but it’s been over a month since I shared a pregnancy update. And as much as I like keeping y’all updated, I also like keeping up with these (at least a little ?) for my own sake as well! So, today we’re talking all things 36 weeks plus a little of what we’ve been up to since my last update!

First off, let’s just take a minute to recognize that we’re under a month until baby’s arrival. Today is the last day of July and baby is coming in August y’all. We’re looking at a little more than three weeks (or less!) until she makes her appearance. Oh, the emotions. I’m feeling them all over here. 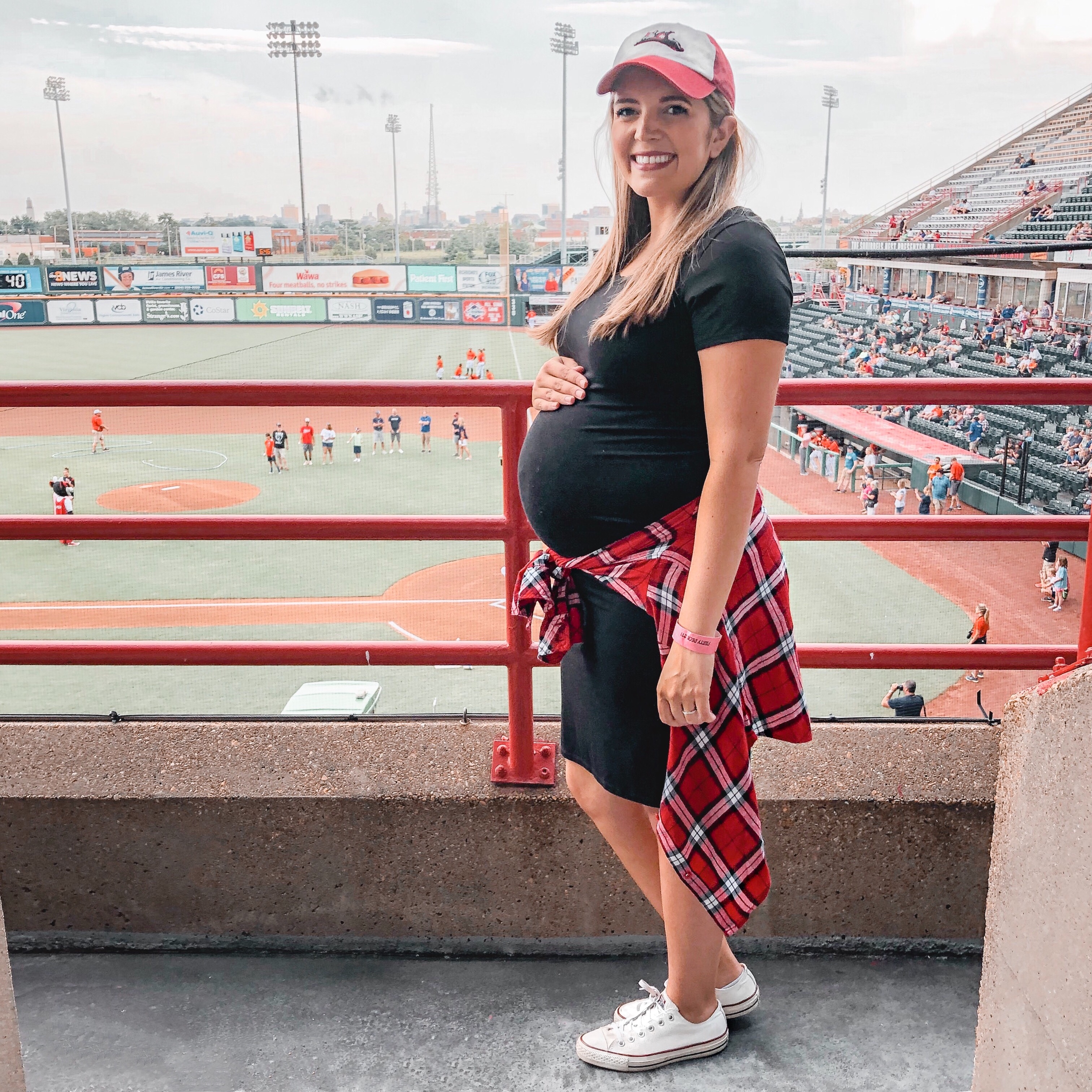 How far along are you? 36 weeks and finally in that ninth month!

All about baby: Baby is estimated to be close to 19 inches at 6 lbs. If that sounds big to you, let me assure you that it also feels big to me. ?My body is rapidly running out of room! She’s still fairly active but I know she’s feeling the squeeze too since movements aren’t as big and forceful. She mainly seems to wiggle after I’ve eaten or when I lay down. (Of course, right?! ?) At our last check-up her heart rate was about 150 bpm.

Have you decided on a name? I think we’ve pretty much decided! Now, I’m not getting anything monogrammed yet, but I am feeling a little more confident. Only a few weeks left until I see her little face and make it official!!

Are you having any cravings? More like the opposite of cravings. I didn’t go through this with Layla, but I’ve been dealing with nausea on and off the past two weeks or so. There are some days when I’m hungrier than others, but for the most part, my appetite has greatly diminished. Girlfriend must be squishing my stomach to oblivion.

Weight Gain: 18.5 lbs. It’s been pretty nonexistant in the past six weeks but again, I think that has a lot to do with my nausea and minimal appetite. I also started this pregnancy heavier than I was with Layla. With L I gained exactly 30 lbs, so it looks like it’s all evening out with this pregnancy. 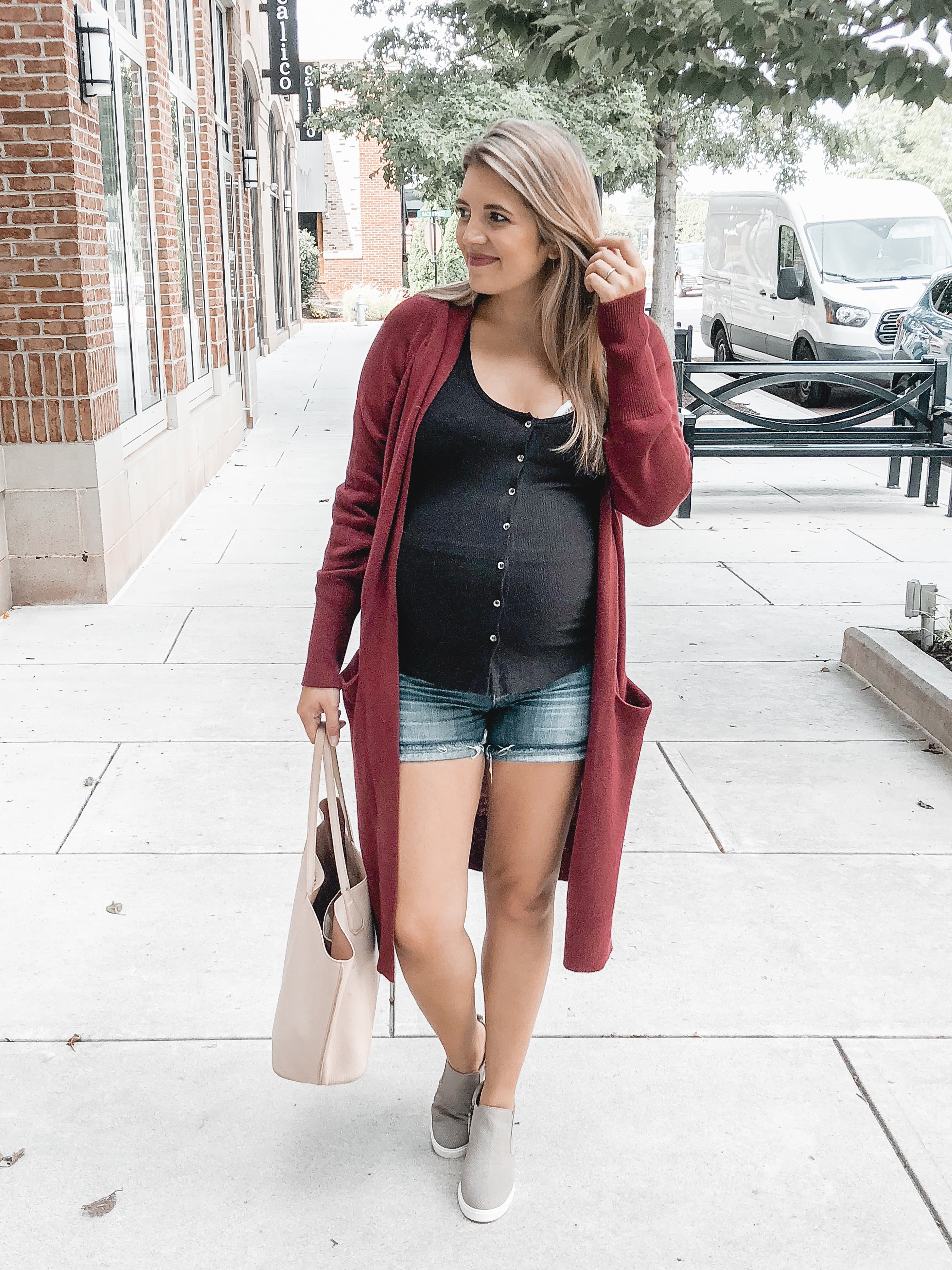 How are you feeling? Pretty good for the most part. I’m tired, achy, dealing with Braxton-Hicks on the daily and fighting insomnia but I feel like that all comes with the territory at this point! ? Over the weekend, I dealt with some pretty intense contractions for a couple hours that made me think baby was on her way! After keeping me awake for a while they finally passed. I also felt baby drop. One moment I was fine, and the next I could barely walk. Thankfully, I’m doing much better now but definitely feel her carrying lower. I can actually get nice, deep breaths in, which is nice. But on the downside, I’m hitting the bathroom more often while she squishes my bladder.

How are you sleeping? Restless leg ain’t no joke, y’all. I’ve had it now for six weeks or so, and it’s the #1 reason I struggle with sleep. Anytime I try to relax, my legs twitch or I get a crawling sensation that makes me have to move. I’ve been taking magnesium daily now, and that seems to help some, but it hasn’t eliminated the issue. I have also had some general insomnia. I’ll go from feeling exhausted to wide awake at the drop of a hat it seems. If I get six hours, it’s a pretty good night.

Baby Prep: Baby’s room is painted, carpet installed, crib assembled, and clothes are all in her dresser. Buuuut, nothing is really arranged in the proper place or decorated yet. The wallpaper hasn’t even been ordered yet. (I know… I’m getting on it.) But I realized it couldn’t be installed until at least 3-4 weeks after painting, so it hasn’t exactly been my #1 priority to have it shipped here. Aaron also put together our Halo Bassinet, which I am super-pumped about using this time around! So, things might not be picture-perfect like they were with Layla, but overall we’re pretty prepared.

Best moment of the week: Going on one last date night with my hubby was so nice. We went to a baseball game to celebrate a friend’s birthday, and it was a nice kid-free night to hang with our friends. We also made it to the sunflower fields! Aaron snapped a couple of maternity photos for me, and we also found someone nice enough to take a family photo of the three of us! So, even though I had a mini panic attack over the contractions and baby coming too early, overall it was a really good week. My parents and sister will be flying in in less than two weeks. Once they get here, baby, it’s go time! ?